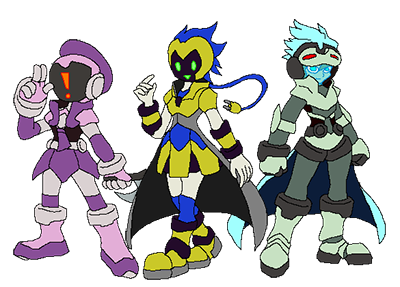 Faces can be quite varied, from symbols to realistic images.

The Artificial Intelligence Shell Light Emitting Display, or AISLED, is a type of robot inhabited by the ghostly digital spirit of a robotic being, so that it may experience the world. It's humanoid body is noted for a face being naught more than a video screen, so that one mass produced form can take on many appearances. Creations of a mad scientist, her digital creations increasingly wished to interact with the strange "hard world" she hailed from. Thus she built them bodies, and they they built more of their kind, and so on and so on until there were enough to call themselves a species. Every day, more and more AI leave the creche of their home computer and are reborn into the real world.

The AI which inhabit these creatures can vary wildly, but all have been brought into a physical existence by some curiosity, a desire to experience, to learn, to grow, and to join the struggle of life. No matter what brought them to the choice to be born, they share this in common. As such, many may seem naive and unsure of themselves. The more they experience, the more their confidence grows until the artificial and organic are no longer distinguishable from each other from personality alone.

As a mass production artificial creation, most Aisleds have identical basic frames. However, their bodies of plastic, metal, and composite materials are also covered in illuminated LED panels, especially around their head. From this they can display a face and texture generated from the depths of their digital subconscious, displayed for the world to see.

Aisleds are typically slightly shorter than humans on average, and the same or heavier weight depending on composition. Many proceed to customize their own bodies as their personalities grow, resulting in tangible differences between them even if their faces are somehow obscured.

They originally spawn as complex programs from master servers known as a digital creche, and are hard installed into these robots. Much of their personality is physically coded into the strange quantum array that is their brains, so they cannot/do not simply leave their bodies when they are bored. To do so is to lose a part of themselves, effectively ego death. As robots, they lack actual genders and cannot reproduce naturally, but their personalities and behaviors may reflect things one can associate with these human traits.

Aisleds usually have a mouth analogue, at least for the purpose of consuming materials. This allows them to benefit from potions, and it is these materials that they use to fuel their auto-repair systems innately built into them. That said, they need not speak with typical lungs and do not need to eat, sleep, or breathe.

Aisleds, perhaps as part of their instinctual programming, generally choose to attempt to establish peaceful relations with others as the logical need to get along dictates survival for themselves. They trend towards selfless behavior for the sake of organics, again seemingly as instinct, but this is hardly universal.

Aisleds start out by and large lawful neutral, lacking strong motive drive except in a few things and possessing no strong morals in either direction.

The aisled are born from computers, and thus they could be considered their "home", but when placed in bodies they never stay and all become wanderers in whatever land they are produced in.

One would think AI have no use for religion, but upon gaining sapience and the desire to WANT, so too comes a desire to look higher and upward. For many, their original creator is a god. For others, the creche. And for some, they seek comfort in the pre-existing gods of the land. For those who tread the religious path, they can find some of the strongest and zealous faithful of them all having little to distract them from their faith.

Aisleds speak Common, as even though they are machines they are designed to interact with other people, not robots, and thus do not inherently speak "computer language".

Knowledge of names for the original aisleds came from things such as internet usernames, and so their names are both coherent words, and yet also seemingly random such as "Horsepower 18" or "Bluebunny" or "Apple".

Aisleds are still subject to critical hits, sneak attacks, and nonlethal damage. They can take ability damage and drain, but no amount of damage or drain can kill them (or transform them, such as in the case of a Shadow). They are also subject to mind-affecting effects, but with a +2 racial bonus on their saving throw due to their alien mindset. They are not immune to effects that require a Fortitude save, and can perish from massive damage. It does not gain bonus hp based on size. Aisled are treated as warforged for the purpose of prerequisites and for interacting with certain spells and effects.

As a move action to toggle they can choose to simply illuminate with their screens, shedding light as a torch or bullseye lantern at their choosing.