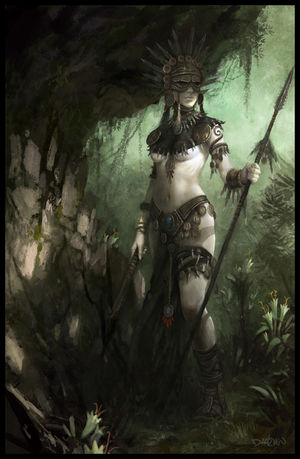 The last of an ancient ruined culture now dominated by the eternally-cursed women.

Deep within ancient forests, far from civilized lands, aiton amazons run wild and free, hunting and foraging in dense jungles, defending their homes and their sisters from monsters and beasts, and living strong and often dying young in such unforgiving environs that demand wise choices and strength.

Aiton amazons are quick to act, feeling that talking will often confuse the situation when their gut has already given them the answer they need. They are quick to distrust all outsiders, especially men, though given time, they will develop friendships outside of their own race. Since all aiton amazons were raised with a specific life-path ahead of them, they rarely change their minds once they settle on an opinion.

Aiton amazons that become adventurers are often outcasts or commanded to adventure as a decree of their priestesses. So, they tend to get along better with folks of other races than their cloistered sisters who stay within the amazon culture.

Aiton amazons stand roughly six feet to six-and-a-half feet in height with strong arms and legs. Beneath the layers of dirt, war paint, tattoos, scars and sweat lays a woman with earthly beauty and strength. Their hair, eyes and skin can be of colors found in nature, tending toward earth tones. Though their skin could be any shade of brown, the colors of their hair and eyes vary from greens, browns, tans, golds, and pale blues. Individual tribes tend to have similarly colored sisters, with only a few unusual individuals, and other than superficial features, they tend to appear very similar in looks and size as well.

Aiton amazon clothes are often hides or leathers adorned with decorative flourishes from things they found in the wilds or taken as trophies from fallen prey. Their armor is purposely dulled to blend in with their surroundings. Often, metallic armor is layered with thin leather or cloth to hide its appearance. Though, within their tribes, metallic armor is rare. On particularly hot days, they weave grass hats or skirts to stay cool.

They also tend to decorate themselves with tattoos. The ink used is a blueish purple in color and is derived from fermenting and boiling a local fruit to concentrate the dye. Tattoos vary from small designs, to complete coverings and depictions of animals or even tattooed camouflage. The dye readily stains clothing, and is also used to dye the robes of priestesses.

Aiton amazons are highly reclusive and don't take well to interlopers in their lands, treating other folk with hostility or aggression. When they interact with neighboring humanoid cultures, they trade goods and take mates to bear their next generation of amazons.

Aiton amazons trade with humans, with whom relations are generally stable to maintain, due to their shared appearances. deeka trade routes are also fairly typical, as the deeka trade food and goods to the aiton amazons in exchange for gold, which the aiton amazons have little need for, living off the land. Aiton amazons often trade ancient coins and art plundered from the ruins of their ancestors or other races who've fallen to the mercy of the jungle.

As aiton amazons spend a lot of time at the mercy of nature, they tend toward neutrality. However, the law of their culture is also very important to them, for it is those few doctrines that uphold their fragile civilization.

Aiton amazons, for all their wild nature, are very social, forming crude cities deep within jungles and forests, even occasionally settling overtop old ruins of long forgotten cultures. They build over top stone with bamboo and thatch houses which are typically very open, except for sleeping areas, which are closed off to prevent insects and bats from pestering them. They wall their city with stones and thatched bamboo, which reach twenty feet high. The posts are sharpened at the tips to prevent interlopers. Typically, the outside walls are also staked with sharp spears to keep the wall safe, since it is made from such a weak material.

Priestesses rule over the function of the cities, while groups of specialized warriors hunt for food and defend their lands from invaders. With a limited range of skills for each individual, all members of a tribe are specialized, and vital to the workings of their society. Since there are no male aiton amazons, their populations are small and limited.

Aiton amazons only give birth to aiton amazon children. Once in a great while, a male aiton will be born. He will be sacrificed on an alter to ensure that their culture does not fall. Even a single male child is considered tremendously bad luck, and the mother may even be cast out for bearing such a child.

Aiton amazons, with tribal traditions, are highly superstitious and pay careful attention to any signs or omens around them:

If the shadow of a great black bird passes over you, it's a sign of bad luck.

Seeing an owl in the day is bad luck, and you will loose something valuable in the coming days.

A great moth landing on you is a sign of death, it means that you or someone you know will die soon.

When a turtle lets you touch his head without recoiling into his shell, its a sign of favorable fortune ahead.

Catching a falling feather is a good sign, it means you will see something or someone that has long been absent in your life.

A sad cry in the night is a sign of bad weather to come.

To be stung by a bee while asleep is a sign of hard work ahead with great rewards.

Depending on the campaign setting, they are likely to worship any good goddess with a nature portfolio.

Sylvan is the language of choice among aiton amazons, who may have learned it from their forest dwelling fey neighbors whom they share land with. Though, when dealing with humans and other races for trading, they do speak Common, although they do so with a rough dialect and heavy accent.

Amazons have short names, nicknames and titles rather than surnames. Their common names are typically short and easy to pronounce for use in combat situations.

"Although I have yet to meet any of the aiton amazons, it occurred to me, that perhaps I should research the subject before venturing into the harsh unforgiving jungles on one of my fool quests. Though it is casual knowledge of their existence, no other scholar could explain to me why they are called "aiton" amazons. A peculiarity I found myself vexed by.

I spent several weeks scouring the library until I finally convinced myself that the answer I was looking for could not be found in the upper stacks, and that I would have to brave the dark and dusty stores below the library to search for the answer I needed. It's not that I mind going down into the stores, I don't find it scary or creepy, its just that everything is so terribly unorganized. I'd hate to meet my death under a stack of stale smelling parchments that collapsed because some fool never bothered with a filing system.

After a month smelling dust and candle wax, and much suffering to the complexion of my skin, I finally located a useful book buried deep under layers of rotting scrolls. I can only guess that its age is far older than the library even. It was written in old elvish, and finely made, still holding a crisp page after so many years. The book was an account of a city state on the collapse. The city fell to ruin, consumed by the approaching jungle, but the priestesses made a pact with Godly forces to give them the strength and wisdom to carry on their race. The Godly forces granted them their wish and blessed them with the power to sustain their priesthood and their dwindling people. This was the account of the city of Aiton. When the city had flourished, it was home to a race of men who were great warriors, but noble and wise as well. They uncovered secrets of seasons, time, mathematics and astrology. They built huge temples of stone to honor their achievements, but alas, after a thousand years, their city crumbled as strife ran rampant. The citizens grew restless with the power held by the royals. It was the priestesses of Aiton, at the plea of the people, who battled the corrupted royals to attempt to save their home, but the royals cursed the priestesses to never give birth to male heirs, dooming their land in spite.

I gather that these priestesses were the first amazons. Though I wonder if perhaps they have forgotten their own history, or if they simply do not wish for outsiders to know it. In any case, I'm glad to be outside enjoying fresh air again."