Incarnated through unnatural means, they are haunted by their past. 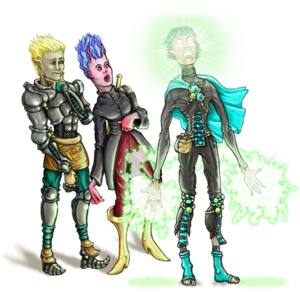 Powerful magic has powerful consequences. Magic can pierce into where the souls of the dead reside and send souls hurtling back to the Material Plane and be given flesh. Magic can call to those whose time had come too soon, only to find that the spell was cast improperly and the wrong soul was retrieved. A powerful soul can travel to the Material Plane and bind matter to himself to form a body. A powerful mage may turn a stone statue to flesh and blood and bind a soul to it. All these are possible origins of candothists. Whatever the cause of their incarnation, they themselves are all the result of a soul returning to the world to live again.

Candothists are glad to be alive and relish every moment they get. They enjoy the pleasures and the pains of existence. They brim with quirks and often show signs of old fashioned conservatism. They love aged things, as if they trigger an innate sense of familiarity in a world that seems strange to them. However, all too often, seemingly innocuous circumstances causes them to freeze in a grip of lost thought. Because of their lost past, they endlessly search their world for answers about who they were, just as much as they would rather forget their past entirely and focus on who they are now.

Candothists are among the most physically varied of mortals, being difficult to identify from half-breed folk and unusual outlanders. They often share traits that are common to certain races, such as pointed ears or small horns. Among the great diversity, identifying an individual becomes a simpler task, as each candothist has one or more unique traits that allow him to be identified after a reincarnation.

Whatever the specifics of their appearances, all candothists appear oddly assembled, with slightly twisted anatomy or strange features. In addition, since candothists might have no gender, they can also appear generic or androgynous.

Candothists range in height from a bit below five feet on the short side to nearly seven feet tall at their tallest, with the shorter individuals weighing around 90 pounds and the taller ones weighing in at nearly 230 pounds. They almost always appear lanky, a trait accentuated by their typically disproportionate anatomy. As their gender varies from incarnation to incarnation, there is no distinction among height and weight among the sexes (or sexless).

Due to whatever trick of scrambled thoughts and memories from past lives, candothists generally have very poor fashion senses, mixing colors and styles or simply dressing awkwardly or in clothes not designed for their gender. They wear what they like.

The physical condition of candothists possesses them of an unusually awkward gait, occasionally likened to that of shambling undead or someone being puppeted about.

Candothists do not have a society or shared culture of their own, as their numbers are far too small and widespread. Needing the companionship of other humanoids for their pursuit of self-realization, they integrate themselves as best they can wherever they find themselves living. Human lands offer the quickest and easiest opportunity for social acceptance as often in human lands, a candothists eccentricities are often overlooked. Frontier towns with mixed folk are also fair locations for candothists to live.

Candothists have no predisposed fixation on any moral or ethical compunction. They may not remember how or why they feel certain ways, due to their loss of memory and reincarnation, and take to their previous alignment readily unless they are not given to the same lifestyle and situation as before they returned to life.

Candothists don't typically prefer to lead sheltered lives and are often drawn into the lands of other peoples. Human lands often support the most variety and willingness to support other welcome races. Candothists don't congregate into communities of their own and have no lands they call their own.

Candothists often praise deities for giving them the power to return to the world of the living as often as they curse those same deities by taking away their memories. They often find solace by praying to deities of Magic and Travel as they search for arcane secrets and wander from town to town. Many candothists, lacking a childhood to impress upon them the importance of religion, as well as lacking the social structure for a need for religion, find themselves reflecting upon the world around them for spiritual guidance.

From the moment they are created, candothists know how to speak Celestial and Common. They can be quite talkative, readily telling stories in hopes of garnering enough trust to hear one in return. They tend to prefer speaking in specialized tongues, depending on the topic at hand. Gesticulating during conversation is also common, even if it is subtle.

Candothists have no racial names, with them often choosing names from faded memories, or being given names by those around them.

There are several circumstances that prevent a candothist from returning to their body upon their death:

There are several circumstances that allow a candothist to return under special conditions:

Upon using their Self-Reincarnate ability, a candothist will have no memory of just being dead, and will often come to the conclusion that they were left for dead, but somehow survived. Waking up in a coffin six feet underground has killed many candothists (again), but when they escape, it often acts as fuel for rumors of undead in the area.

Each time a candothist uses his Self-Reincarnate ability, they must roll on the Morphic Reincarnation chart below to determine what parts of their form change. Each Incarnation starts at the adult age and characters loose any age penalties or bonuses from their previous incarnation. Candothists do not have a maximum age from which they can be incarnated from, but they still die of old age. If Neutral is rolled, the character appears neither male nor female. Their unique candothist traits (such as horns or pointed ears) do not change during reincarnation.

Roll a d3 for each attribute.

Each candothist is created with one or more unique traits that aid identification even when its body is altered during the morphic reincarnation process. Listed below are some basic concepts and ideas to help players decide on possible unique traits.

If you would prefer, you may roll a d12 to determine a unique trait category randomly.