Guromescai are the result of a rare breeding between a merfolk and a malaquian. A great majority of guromescai are female (around 80%). The mother is typically a malaquian in these pairings, and more likely to be raised in malaquian society.

A guromescai can breed with merfolk to have a 50% chance of having either merfolk or guromescai offspring. If they breed with malaquians, there is only a 25% chance a child will be carried to term, of which it is always a guromescai.

While rare, it is not unheard of for malaquians or half-breed malaquians to transform into guromescai upon coming of age. Exact causes for this are unknown. It is also unknown why guromescai appear so different than either of their parent races, being monstrous humanoids.

Scholars tend to disagree greatly on their origins and significance. Some scholars speculate that they are destined to emerge as their own race in time when their numbers rise high enough. Other scholars speculate that they were once a race in the past and that racial memory has found a way to reassert itself. Even others assert that the sahuagin have something to do with tainting the blood of other sea races to produce children closer to them. A few rare scholars believe that somehow tritons might be to blame.

A guromescai may train her bloodline with entry into the Guromescai Paragon (3.5e Racial Paragon Class).

While often seen as freaks or monsters, guromescai are typically warm and kindly toward others. Though some use their charm as a front to hide their true feelings. Because of this, they often tend to "put on a show" in public, only relaxing around their closest friends or when alone.

Some never quite manage to fit in with society, being born obviously different. This can lead to guromescai becoming sarcastic, jokey or disagreeable as a means of coping with others. Some use guarded answers and diversions as a means of hiding their naivety, as many are still quite young when they strike out into the world. 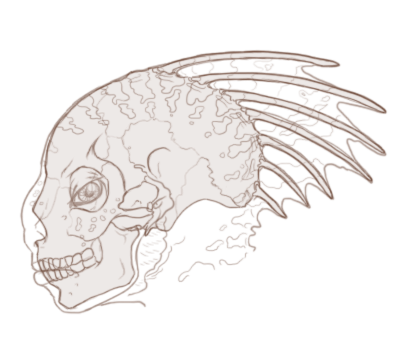 Guromescai are smaller than their parental races, being roughly human in size and weight, albeit slightly lighter and thinner built. Their heads bear a great resemblance to that of a fish, but their jaw structure is mostly humanoid. They have wide, brightly colored eyes, which are typically bright golds, greens, blues and purples. A large fin protrudes from the back of their stripe-patterned head and runs to the base of their neck. Another small fin appears midway down their spine. A fishlike tail protrudes from their hips and hangs down nearly to the ground. Their smooth skin is typically a shade of green with bluish or aqua stripes that run from their forehead down to the tip of their tail. The rest of their body is humanoid, with slim hands and feet and trim and lean arms and legs.

Female guromescai, being the most common, overshadow the lesser seen male guromescai, who's coloration is a bit duller. Male guromescai rarely appear rugged or manly, often looking like young adults well into middle age. Guromescai age in appearance very gracefully, with the primary sign of aging being a gentle fading of their colors to more silvery tones.

Young guromescai grow and reach maturity quickly in relation to most humanoids.

Guromescai, with their innate charm, get along with most gentler, civilized races. In the recent past, they are so few in number, they were typically seen as strange curiosities. Though, their numbers have been on a slow, steady rise, gaining them more recognition in coastal areas. In uninitiated lands, some folk might immediately get the impression that they are related to the dangerous sahuagin, locathah or skum and be fearful of them.

Guromescai have no racially-predisposed alignment, though most are goodly aligned. As they don't often fit into societies, some tend toward chaotic alignments as well.

Guromescai live within the lands of other civilized cultures, most often those of their parent races, but also among other welcoming lands, and typically those that border large bodies of water and waterways. Guromescai loathe dry and cold climates.

As adults, guromescai often adventure out on their own to find their place in the world. This has earned them a reputation as travelers and wanderers. Occasionally they'll settle into cities where they can find work in nearby waters.

Guromescai often follow those deities to whatever society they were raised within. As adults, they may stray and worship whatever deity they please, but those deities with the Water domain are most common, such as Elnade. They also tend to praise deities of Travel.

Guromescai are raised to speak Common and Ayawii (the language of malaquians). Though the Ayawii language is mainly spoken, components of it involve a few gestures, which are widely accepted among other cultures as well.

Interestingly, the term "guromescai" in Ayawii roughly translates to "fish, not newt".