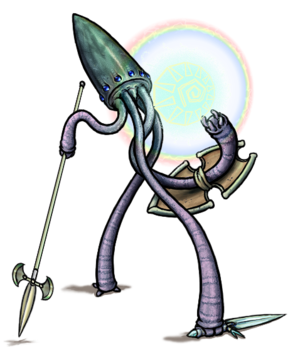 This is the natural course of development for agiishell appilons.

Agiishells wield supernatural powers. They cast spells or manifest psionic powers, however, they don't do it as well as those straight classes, gaining benefits elsewhere in the form of physical resistances and supplementary functions. Players should be sure to research fully whatever other class they will be learning their progression from. Agiishells generally choose their first level as a spellcasting class and then take levels in this paragon class.

Players should be sure to maintain their primary casting or manifesting ability. Since they'll be behind in the access of powers and magic that full-progression classes gain, they need to ensure that their available powers are functioning optimally.

Races: This racial class is designed specifically for agiishell appilons.

All of the following are class features of the agiishell paragon appilon.

Proficiency: Agiishell appilons are proficient with simple weapons and light armor (but not shields).

Racial Ability Score Boost: At 1st level and every agiishell paragon level, it gains a racial bonus to its ability scores. At 1st level it gains +2 Constitution and +2 Intelligence.

At 3rd level it gains +2 Strength and +2 Intelligence.

At 5th level it gains an additional +2 Dexterity and +2 Intelligence.

At 6th level he gains +2 Wisdom. Agiishell paragons have much potential for their racial prowess that takes training and growth to unlock.

Spellcasting: If the agiishell appilon is a first level character, it may choose a base class in which to advance its spellcasting or manifesting from for the purposes of gaining spells or psionic powers during this agiishell racial paragon class.

+1 Caster Level or Manifester Level: At 1st level and 4th level, an agiishell appilon gains an effective spellcaster or manifester level despite not gaining new spells.

Resistance to Energy (Ex): An appilon's resistances to acid, cold, electricity and fire increases at every agiishell paragon appilon level.

Dedicated Bio-Energy (Ex): At 1st level, an agiishell paragon's dedicated bio-energy pool can hold a maximum amount of charges equal to 3 plus its Constitution modifier (minimum 1), and recharges at a rate of 1 charge per minute. These charges may be expended to facilitate its Swift Bolt only.

Swift Bolt (Sp): At 1st level, an agiishell appilon can spend 1 bio-energy charge as a swift action to shoot a projectile of force. This bolt deals 1d3 damage per its effective spell level to a single target within close range (25 ft. + 5 ft./2 HD). The bolt strikes unerringly, so long as the target has less than total cover or total concealment. Specific parts of a creature can’t be singled out. For the purposes of spell resistance, damage dealt and other effects calculated by spell level, swift bolt is the equivalent of a spell whose level is equal to one-half the appilon’s HD (rounded down), with a minimum spell level of 1st and a maximum of 9th at 18 HD level or higher.

Telepathic Beacon (Su): At 2nd level, an agiihell appilon is capable of generating a weak form of its telepathy. Creatures with at least 3 Intelligence that share a common language and are within 20 feet of the appilon are able to understand mental communication and communicate back. As the communication is unfocused, all available creatures within the radius may "hear" the appilon, but not necessarily understand it.

This bonus increases to +2 at 6th agiishell paragon appilon level.

Hold Breath (Ex): At 2nd level, a agiishell appilon can hold its breath for a number of rounds equal to 4 × its Constitution score before it risks suffocation. An appilon who suffocates instead becomes completely dormant, stable and helpless at -1 HP. An appilon shakes off its dormancy after being exposed to atmosphere for 1d4 rounds. Upon awakening, the appilon is slowed for 1d4 rounds afterwards.

At 4th level, this bonus increases to 8 × its Constitution score.

Bio-Energy (Ex): At 3rd level, it gains access to its bio-energy pool. An agiishell appilon's bio-energy pool can hold a maximum amount of charges equal to 3 plus its Constitution modifier (minimum 1), and recharges at a rate of 1 charge per minute. These charges may be expended to facilitate its Bio-Energy Spells and various Xenotheric feats. This ability replaces Dedicated Bio-Energy.

Bio-Energy Spells (Sp): At 3rd level, an agiishell appilon may cast a quickened detect magic using a charge of bio-energy to do so. However, the appilon gains the results of having concentrated for the full 3 rounds and may not continue to concentrate on the spell. These spell-like ability castings use the key ability modifier of its choice (either Intelligence, Wisdom or Charisma).

At 4th agiishell paragon level, it learns to cast a quickened status by expending 1 bio-energy charge.

At 5th level, it may cast a quickened detect thoughts by expending 1 bio-energy charge.

Lesser Telepathy (Su): At 4th level, an agiishell paragon is able to telepathically focus and communicate with creatures within 40 feet with at least 3 Intelligence that share a common language. This ability replaces both Telepathic Touch and Telepathic Beacon.

This radius increases to 60 feet at 5th agiishell paragon level.

Burrow Tunnel (Ex): At 5th level, an agiishell appilon is capable of burrowing a tunnel behind it. In addition, its burrow speed increases to 10 feet.

Telepathy (Su): At 6th level, the agiishell appilon gains true telepathy. Within 100 feet, an appilon can telepathically communicate with creatures of at least 3 Intelligence. This ability replaces Lesser Telepathy.

Other Classes: Agiishell paragons often rely on their ortshell brethren for support. They prefer the company of those who can manage opponents and keep them out of melee when necessary.

Combat: Agiishells should focus on controlling and manipulating the battlefield. Their higher ability scores (and thus higher save DCs) make them ideal for casting debuffs on opponents.

Advancement: When finished with their paragon levels, agiishell paragons often go into prestige classes or simply continue on the course of their source progression's class.

Agiishell paragons fit in with their own kind, and among their friends, but rarely ever anywhere else. Only those of great repute ever get the opportunity to walk down a foreign street without garnering odd looks or fearful glances. In humanoid lands, they are often initially considered monsters or possibly fiends.

Daily Life: Curious and perceptive, agiishell paragons seek out wisdom, knowledge and new opportunities. Agiishells are also innately parental, and often do their best to ease the burden on their allies.

Notables: Hall Red served as a scout and guide for a wayward adventuring group who landed, stranded, in his world. He led them to safety and taught them the to safe passages to their destination. A significance of his name came into play in a carved out passageway covered with a thick covering of carbuncle bloom. The group paused for a moment to ponder the coincidence. The passageway collapsed before them, as their moment stood pondering saved them from certain doom via falling rocks. When the quest came to an end, the sense of adventure ahead left him puzzled. Though, his destiny lay beyond his world, and when the adventurers departed, he departed with them back to their lands, where he was the one soon asking questions and in bewilderment of his surroundings.

The group traveled together for many years until finally, they departed ways, retiring or striking out on ventures of their own. For two generations of man, Hall Red traveled the wilds on his own. He faded into myths and stories.

By chance, one day as he came upon a road, a red banner emblazoned with a golden house and a star caught his attention. The banner flew above a caravan as raiders rushed from a rocky ledge and laid upon an ambush. Normally staying far from the affairs of folk, something within him snapped and he rushed to the caravan's aid.

He shot forward like a bolt, landing within the midst of the brawl. From his flowing limbs, torrents of blazing fire streamed forth. The ground shook all around. The raider's arrows and javelins clinked harmlessly off his battleworn shell. With a look, fear was in their hearts, consuming them, and the raiders fled into the forest.

The caravan guards greeted him with questions and suspicions, but the caravan's leader, a brash young woman knew who he was instantly, recognizing him from the stories her grandfather told. Hall Red took the banner as an omen and joined the caravan, once again placing himself on a path of history and renown.

Organizations: Agiishell paragons make up a large percent of all agiishells. They often gather with ortshells in hunting parties or defensive posses to protect their communities. Agiishell paragons also often converge to discuss social concerns and welfare matters.

NPC Reactions: Agiishell paragons are commonplace on Messos Myonel. When they travel to worlds where the folk are unknown to them, they are often met with initial suspicion, fear or hostility.

Characters with ranks in Knowledge (the planes) can research agiishell paragons to learn more about them. When a character makes a skill check, read or paraphrase the following, including information from lower DCs.