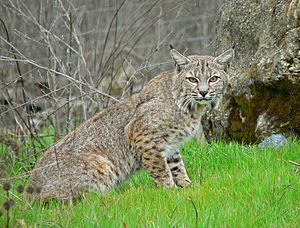 Stalking through the underbrush, you briefly catch a glimpse of moonlit golden eyes... before a felid beast leaps out for your face!

The bobcat is mid-sized lynx about twice the size of a normal housecat. Born and bred in the wild, they are hunters which stalk their prey and attack suddenly. Though the Bobcat prefers rabbits and hares, it will hunt anything from insects and small rodents to deer. Prey selection depends on location and habitat, season, and abundance. Few things prey on the bobcat, only man poses a quantifiable threat.

Bobcats will stalk after a prey, and once it is at a moment of rest it springs out and attacks, using its scratch attack to gain an advantage in damage, or kill their lesser prey outright.

Scratch Attack: When flanking or attacking an opponent who is denied their Dexterity bonus to AC (regardless if they have a bonus or not) the bobcat deals an extra 1 point of damage per 2 HD on its attacks (round up). This is similar to sneak attack, but does not count as sneak attack for the purpose of feats or prerequisites.

The bobcat can be used as a familiar. Bobcats grant Scratch Attack to their master. This is similar to sneak attack, but does not count as sneak attack for the purpose of feats or prerequisites.