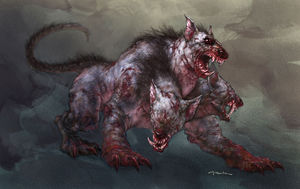 As your party approaches the black Gates of Hell, each spire creating the fence wreathed in flame, a black-furred beast some 15 feet in length from nose to tail drops heavily from his perch on an overlooking rock face. His form is entirely canine, appearing as an oversized wolf, ending in three massive heads, each one dripping with saliva and exuding the palpable stink of recently devoured flesh. With each repetitive pant from one of the three heads, a burst of fire is released. This, you realize, is surely the creature responsible for the charred bones you saw on your way here.

Cerberus is a uniquely advanced hellhound, possessed of three equally functional heads. He is charged with the protection of the gate of Hell, and will fight to the death even against foes who far outmatch him. This is because as the guardian of Hell, he is essentially unkillable, automatically reviving 24 hours after being slain.

Like his lesser kin, Cerberus is deadly in melee, even moreso because fighting him is essentially fighting three hellhounds in one. With his multiple heads, he tears apart anything he can sink his many teeth into. He is always considered to be in the Disdainful Shoulder stance. This bonus is reflected in his stat block.

Devilbred: Although he is not a baatezu, Cerberus is similar to a devil in many respects. He is treated as a devil for the purposes of being affected (or not affected) by any ability that selectively targets or excludes devils (such as any bateezu’s aura of cold logic). Cerberus is also immune to fire damage (but not hellfire damage).

Hell's Breath (Su): Cerberus has a breath weapon of hellfire, dealing 11d6 points of hellfire damage (treat as untyped damage). This breath weapon is useable in two forms, although either requires a standard action and both deal the same damage. The first is a cone 60 feet long, high, and wide at its longest point for which a successful Reflex save (DC 27) halves the damage dealt. This save DC is Constitution-based. Cerberus may also fire a ball of flame at a single target as a ranged touch attack within 120 feet. If he wishes, Cerberus may split the latter of these two options into three smaller simultaneous blasts, striking up to three opponents separately.

Keeper of the Dark Gate: Cerberus has the ability to sniff out incoming teleportation effects, automatically detecting the exact position of any such effect that begins or ends within Long range (800 feet) of him. He also sees naturally as though under the effects of a true seeing spell.

Lastly, Cerberus automatically revives (as a true resurrection spell) when slain to reassume his position at the gates of Hell after 24 hours. A spell that holds him in suspended animation but not dead can stop this ability from activating indefinitely.

Scent (Ex): Cerberus can track and locate foes through his keen sense of smell out to a distance of 120 feet. In addition, Cerberus gains the benefits of a find the path spell (with the tracked creature set as the target destination) whenever he makes a Track check.

Spell-Like Abilities: At will - rhino's rushSpC, 3/day - plane shift. Caster level 10th. Save DC’s are Charisma based and have a default DC of 22.

Three's Company (Ex): Cerberus is a curious specimen in that he has three functional heads. But since they are all connected to the same body, they are irrevocably tied together for mutual survival. As a result, they have a limited ability to act separately of one another, gaining two additional purely mental standard actions per round and two additional saving throws against any effect that requires a Will save as though he was under an effect similar to the schism power.