This is an April Fools article. It is not intended to be serious, but should be mechanically functional and meet any indicated balance. 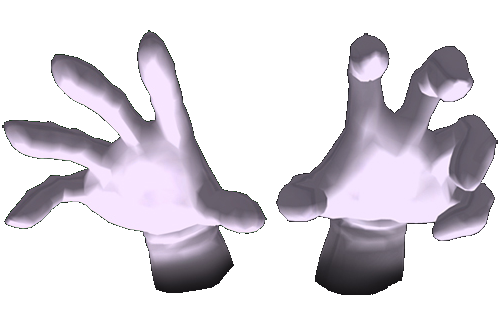 The result of a strange and powerful spellcaster said to be the avatar for an unknown overdeity, the dungeon mastermind is a prime manipulator of the world. Its plots are unknown, working for neither good nor evil, but only so that "the story" plays out. It watches the world and chooses those who will work its will, usually unseen and invisible. But in strange times these manipulated beings may discover the truth and seek out this mastermind and to put its dangerous behavior to a stop once and for all.

The dungeon mastermind is a pair of ghostly white hands, left and right. They sometimes show up solo, or often in a pair, easily 16 ft tall and capable of flight, speech, and powerful attacks and magic. It is said that even this form is but an avatar of a more abstract being which cannot be defined by mere logic.

Dungeon masterminds speak all languages, and have unknown weight.

The dungeon mastermind is extremely cunning, and always plans out every step of its attack. Even when things are not going according to plan, they are able to manipulate and react in such a way that one thinks that everything is planned. The right hand performs miracles of magic, blasting or supporting in equal measure, while the left hand is a violent chaotic being which reveals in smashing its opponents with utter cunning brutality and brutal cunning. Defeating one hand is no good fortune, for the death of one hand empowers the other. And they will always be back until the true dungeon mastermind is found and vanquished (see below).

Alter System (Su): If both left and right hands of the dungeon mastermind are present, they can alter reality as a standard action on both of their parts. On completion, reality is altered within 1000 ft of the dungeon mastermind, applying a global status effect. Effects include either the improvement or reduction of any one effect by up to 50%, such as all creatures taking 50% less slashing damage, 50% more healing, 20% more fire damage, or similar. It can also duplicate the effects of an extraordinary haste, slow, or granting an extra move action each round. Be aware this applies to all creatures, both itself and its opponents. It can only have one such effect on at a time, and each effect only lasts up to 10 minutes or until dismissed or overwritten.

Beyond Good and Evil: The dungeon mastermind is a being beyond simple laws and alignments. It has no alignment (or rather its alignment is itself) and thus counts as whatever alignment or lack of alignment is most beneficial. They still count as lawful or chaotic subtyped for the purpose of bypassing damage reduction and having their damage reduction bypassed.

Death Throes (Su): When the dungeon mastermind drops below 0 hp (and also 2/3rd and 1/3rd, or 280 & 140 hp due to feats), the dungeon mastermind goes into death throes and explodes with power! All creatures within 1000 ft are hit with a shockwave which deals 2 points of damage per HD (40 damage) with a Reflex save for half, and the terrain can be altered and changed in any fashion up to the limits of mirage arcana. Unlike the spell, the changes are real and lasts for 1 hour. The new terrain can be fantastical and even impossible for the plane, such as duplicating terrain effects of the Astral Plane in the prime material. The terrain can be dangerous, but it can neither entrap creatures in the area nor place them in danger. For example, they could transform the landscape into a volcanic blasted hellscape, but not place creatures in the mouth of an active volcano.

Those within 20 ft of the dungeon mastermind are subject to more extreme reality warping effects. On a failed save, they take 5 damage per HD (100 damage) save for half and are rendered staggered for 1d4 rounds on a failed save.

Hand of God (Sp): The right hand of the dungeon mastermind has a few unique spell-like abilities at will, as follows. All the save DCs are Charisma based.

Hand of the Devil (Ex): The left hand of the dungeon mastermind has a few unique maneuver-like abilities which are refreshed automatically after 3 rounds, as follows. All the save DCs are Strength based.

Catch and Throw: As a 5th level counter maneuver, the dungeon mastermind can interrupt a melee attack against it as an immediate action with an opposed attack roll. If successful, the dungeon mastermind still takes damage but immediately can make a grapple check, grabbing the target on a successful grapple check, dealing its unarmed damage, and immediately throwing the target up to 200 ft away. The creature may take falling damage if they are unable to fly.

Drill Drop: As a 5th level strike maneuver, the dungeon mastermind can grind its opponent into the earth. This is a 1 round action in which the dungeon mastermind flies far up into the sky, leaving the battlefield for the duration. One round later, it crashes down, drilling into its target with its fingers. The dropping attack is an automatic critical hit, and the creature must make a Fortitude save (DC 28) or fall prone. This save DC is Strength based. This maneuver requires a ceiling of at least 1 mile high to function.

Heavy Fist (Ex): The left hand of the dungeon mastermind's unarmed strike is treated as a two-handed weapon when beneficial.

Omni-Knowledge (Ex): The dungeon mastermind has a deific understanding and knowledge of "the main plot". It's a very meta concept, but the dungeon mastermind is a very meta creature. This includes knowledge of important NPCs and their current behaviors and activities, but curiously not any PCs nor any creatures not directly related to "the main plot".

Phase Out (Ex): At will, the dungeon mastermind can become ethereal as per ethereal jaunt. In addition, on dying, they automatically become ethereal and their corpses or whatever remains travels back to their "home" at a rate of 100 ft a round. If one can track the return of the hands, one can determine the location of the dungeon mastermind's home. After returning home, the hands begin to regenerate, appearing after 1d20 days on the outskirts of their home.

Spells: The right hand of the dungeon mastermind prepares and casts spells as a 20th level sorcerer. However, they can change up their spells known list once per day after resting for 8 hours. They have access to the cleric, druid, and sorcerer/wizard spell lists, and cast as arcane casters. The following is the default spells known by the right hand. The spell DCs are Charisma based.

The dungeon mastermind's hands cannot affect the dungeon itself or anything within its area, but it has knowledge and absolute control of any native monsters, creatures, and traps there and often manipulates its surroundings to give the heroes a difficult time before its heart is stolen and removed from the dungeon.

Once removed, the dungeon mastermind is defeated and will not respawn. However the item must be tended to. If the item is lost for more than a year and a day, the item will once again find itself back within its home dungeon and the process will begin anew.