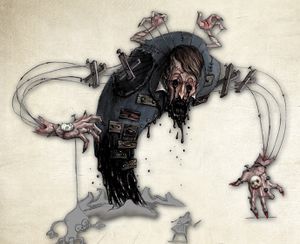 It is best you forget...

As you approach the head of the infernal train, a massive titan rose to meet your eyes. Severed at the waist, its body was huge, gaunt, and corpse-like. Its face is hollow with black corruption oozing from its eye socks, mouth, ears, and many weeping sores and wounds, forming a slick pseudopod from which it slithers upon the ground. Its arms are missing, but its hands remain, puppeted in the air by faint silver strings and with disturbing doll-like faces embedded on the top of its hands and upon its black and snake-like tongue. Its voice rumbles deeply with contempt as it oozes your way.

None know the identity of the being only known as the Engineer of Ruin. A massive ruinous beast, avatar of the Infernal Train, and possible creator of the train, the engineer's mission is to erase the entire scope of creation, from the material world to even the memories of its existence. The engineer never leaves his post within the coal-blackened controls of the Infernal Train, meaning only those brave or foolish enough to approach the eldritch monstrosity even know of its existence. Some suspect that the titanic being was once a god who was forgotten, and in a last act of bitter revenge swore that all of the gods and their works should also be forgotten. Whatever the cause, the engineer is certainly the source of the sorrow that the Infernal Train brings. Only by his defeat will the train come to a rest and then fall into pieces, forgotten once more until the day it is called on its hellish journey again.

The engineer is the only ruinous beast which speaks, though it remains cryptic and undeniably hostile. It seems to desire that creatures forget they saw anything, and if they refuse, it is not against forcefully ending their memories and draining them away. Its focus on its mission comes beyond all else, and other creatures are mere toys to it.

The engineer is a difficult opponent, as short of a specific type of weapon, it is undying due to its regeneration. The black ooze seeps around the engineer, protecting it from harm and rendering most damage nonlethal. Only through certain abilities can this invincible sheathe be broken. Fortunately, many of its attacks force it to drop its defenses, and a githyanki silver sword can artificially induce the dropping of defenses. The engineer knows this, and will favor attacks on the wielder of such weapons for its own protection.

The engineer uses maneuvers often, otherwise limited to simply two or three attacks. Because of its low speed and mobility, the engineer rarely makes more than a 5 ft. step, employing its ranged attacks until the targets draw near or leave. Its Quickness allows it to use a maneuver and refresh in the same round, but doing so leaves it open for lethal damage.

Aura of Lethe (Su): Reality seems to slip away the closer to the engineer you approach. All creatures in 60 ft. must make a Will save DC 31 or completely forget who they are and what they are doing. This has the effect of microcosm for all purposes. Those that succeed are immune for 24 hours. The save DC is Charisma-based.

The danger isn't over, though, for any creature which dies within the range of the aura will fade away 1d4 rounds later as reality forgets their existence. They become unmade, and cannot be raised, resurrected, or even remembered. Only through the death of the engineer can one's memories return, though the creature remains lost to all.

Improved Grab (Ex): To use this ability, the engineer must hit with a claw attack. It can then attempt to start a grapple as a free action without provoking an attack of opportunity.

Maneuver-Like Abilities (Ex): The engineer possesses several unique maneuver-like abilities. He may use them once each before needing to refresh them all as a full-round action.

Ground Punch: A standard action strike. Make a normal attack with a claw, except it deals bludgeoning damage and the target must make a Reflex save DC 41 or fall prone. The saving throw is Strength-based.

Ground Slam: A standard action strike. Its hand slams into the ground, causing an earthquake. All targets in a 20 ft. radius burst must make a DC 41 Reflex save or fall prone. The saving throw is Strength based.

Shockwave: A full-round action strike. It carves arcane runes along the ground with a nail, which bursts into a wave of destructive energy. This deals 25d6 damage out in a 60 ft. cone, with a Fortitude save for half. Creatures not in contact with the ground are not affected. This is a supernatural ability.

Sludge Bomb: A standard action strike. It vomits up 1d4 spheres of filth which can strike any creature in Long range (2900 ft.). Spheres can target creatures separately, dealing 10d6 damage with each sphere and forcing a Fortitude save vs nausea for 1 round. Failed saves are cumulative. For example, failing 3 saves renders the target nauseated for 3 rounds.

Tap Chase: A full-round action strike. One of the claws runs in a line, trampling creatures in the path. All creatures in a 60 ft. line take 20d6 piercing damage and 6d6 disintegration damage and are knocked prone, and may either take an attack of opportunity at -4, or make a Reflex save DC 41 for half damage and negating the knockdown. This does not function on flying creatures.

Wide Slap: A full-round action strike. All creatures in a 30-ft. arc are struck for 20d6 bludgeoning and 6d6 disintegration damage. This arc covers the entirety of the area in front of the engineer, in effect a 180 degree cone instead of the 90 degree cones used by breath weapons and spells.

Quickness (Ex): Although not particularly dexterous, the engineer is supernaturally quick. It can take an extra standard action or move action during its turn each round.

Regeneration (Ex): The engineer's regeneration is bypassed by epic intelligent weapons, or in the following situations.

Any of these situations remove the protective ooze from his hands and mouth for 1 round, allowing opponents to strike for lethal damage.

Ruinous Body (Ex): The engineer appears to be the source of the thick toxic substance which makes up its minions. The toxin is so concentrated that it no longer simply eats flesh, but reality itself. Its natural attacks deal an extra 6d6 damage which disintegrates as per the disintegrate spell. This destroys force effects and reduces those killed by it to ash as appropriate. Those striking the engineer with natural attacks, unarmed strikes, or grappling the creature take the same 6d6 disintegrating damage on each strike.

Silver Strings (Ex): The engineer's disembodied hands are puppeted by silvery strings akin to that of astral projection. Things which can sever the silver cord of astral projection can sever these strings. Each claw has a set, each set possessing hardness 5 and 50 hp. By destroying the silver strings, it disables the use of that claw for 1d4 rounds. If both claws are disabled, it can only use the Sludge Bomb and Spawn abilities to attack, both which leave it open for creatures to bypass its regeneration.

Spawn (Ex): As a standard action, the engineer can create either 1d3 drifting ruins, 1d6 menacing ruins, or 2d6 insidious ruins. The engineer may do this every 5 rounds.