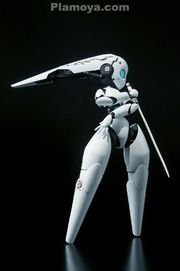 A sleek white humanoid robot covered in a flexible skin-like plastic shell, it moves with a inhuman grace as it strikes a series of deadly katas.

Developed by the Scientia company as a pet project for one of their martial artist minded researchers, the Unarmed Combat Android was little more than an animated fighting dummy to test one's skill against. Covered in a dilantantoplastic outer shell, its surface was soft enough to not cause severe injury yet durable enough to take a beating. Of course, it wasn't long before they realized that the relatively cheap units could be used as actual combat soldiers as well, and their programming was upgraded to take on a varied amount of missions while armed or unarmed.

They come in at a fairly short 5 feet tall and a very lithe 150 lbs. They have the ability to understand one vocal language (usually Common) but do not typically have the ability to speak. It instead emotes replies with body language, beeps, and the position of its antenna.

Designed for combat, the primary combat style programmed into these machines appears to be capoeira. However, units with karate or other forms of combat have been spotted. They move with rapid precise motions and slightly jerky motions, but make for fair sparring opponents or dangerous combat foes. Sometimes a martial artist may assume direct control, typically via a headband designed to duplicate thoughts and motions, and teach their student directly.

As it has unarmed strike, it can choose to deal lethal or nonlethal damage, as requested. It is proficient in all monk weapons as well.

Flurry of Blows (Ex): The unarmed combat android has flurry of blows like a monk, allowing it to get an extra attack (+10/+10/+5) as a full attack action.

Improved Evasion (Ex): The unarmed combat android has improved evasion like a monk.

Monk Training: Due to the unique software used for the unarmed combat android, it possesses many traits of a monk of its level. It has the monk's AC bonus, speed bonus, unarmed strike damage, flurry of blows, stunning fist, saving throws, and proficiencies.

Qingggong (Su): The unarmed combat android is an expert of falling with the grace of a cat. It is immune to falling damage and can seemingly employ a supernatural ability to control it's weight, allowing it to walk upon surfaces that cannot support it such as the surface of water or a single thread. However, when moving like this is cannot move faster than it's move speed or it will fall through.

Stunning Fist (Ex): The unarmed combat android can use Stunning Fist like a monk. Unlike the monk, it is not limited per day but instead can only attempt a Stunning Fist once every 5 rounds. The DC is 17, and is Wisdom based.

Skills: The unarmed combat android has a +8 racial bonus on Balance, Jump, and Tumble checks.

Juno-15 Unarmed Combat Androids are build out of a composite of many different metals, plastics, and alloys which must be processed in a factory. In addition its computer core requires special components and programming. The cost of the base material components are worth 1600 gp.