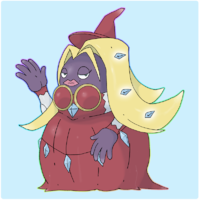 *These abilities are all bardic music effects, and count against Magihexy's bardic music limit.
**This is the bardic music version of suggestion, and can only be used on a creature that Magihexy has already fascinated via its bardic music. The suggestion itself does not expend an additional usage of bardic music (hence why it is labeled as being usable at will), though it may only be attempted once on a single creature per fascination.

Magihexy has a +8 racial bonus on Perform (dance) and Perform (sing) checks.

Magihexy functions in many respects like a 15th-level bard. It can use bardic music and cast bardic spells just like a 15th-level bard, and unusually for a Pokémon, it is proficient with simple weapons, shields, and light armor. (The sample Magihexy is not wielding weapons or wearing armor, though it does wear some magic items.)

Typical Physical Characteristics: Appearance-wise, Magihexy looks like a larger, more curvaceous Jynx that wears a slightly more form-fitting dress. The dress is simpler in design than Jynx's, but more elaborately decorated (think the sort that Reimu from the Touhou series would wear. Or better yet, Marisa.) By "decorated", I mean that Magihexy's dress is lined with all sorts of lucky charms, all made of ice. The dress is somewhat loose, but long enough that Magihexy's legs aren't visible. Its blonde hair is a bit longer than Jynx's. It also wears a pointy hat, reminiscent of a stereotypical witch.

Alignment: Magihexy can have any nonlawful alignment, just like a bard, but tends to be chaotic neutral.

Like its predecessors, Smoochum and Jynx, Magihexy prefers to live in frigid caves. However, it's also not uncommon to see a Magihexy in an urban environment. (No, they are not strippers, they're ganguro yuki-onna dancers. That said, it is more often than not aware that humanoids tend to find it physically attractive and willing to exploit this.)

Magihexy tends to wear magic items that increase its allure.

Magihexy is theoretically playable, but as a Pokémon, it's better suited to being captured by a Pokémaster.

Magihexy already treats its Hit Die as bard levels for many purposes (see Advanced Creatures below). This does not prevent Pokémasters from being able to catch it.

Magihexy already treats its Hit Die as bard levels for many purposes (see Advanced Creatures below). This does not prevent Pokémasters from being able to catch it.

Magihexy continues to treat its hit die as bard levels for the purposes of available bardic music, number of uses of bardic music, bard spells known, and bard spells per day. It also learns more techniques as it levels up.

At 19 HD, Magihexy learns Perish Song (Su). At Magihexy's option, instead of serving as a calming lullaby, its song may foretell a great loss, and those who hear it risk death itself. All who hear this song must make a Will save (DC = 10 + ½ Magihexy's HD + Magihexy's Wisdom modifier). If they fail, they become shaken as they realize their life is going to be cut short. If, two rounds later, they can still hear the song, they are instantly slain.

A Magihexy can end this by no longer singing, and can sing to counter another perish song (including that of a Pokémon not belonging to its own evolutionary line, such as a Lapras or Politoed). To begin singing this requires a standard action, but to continue merely takes a Swift action. It is not considered a bardic music effect, for it incurs its own cost; if Magihexy does not stop singing after three consecutive rounds, it too passes away from its own song.

At 22 HD, Magihexy learns blizzard as a spell-like ability usable once per day. It is treated as an [Ice] effect.

At 29 HD, Magihexy learns Fiery Dance (Su). It gains a solar aura similar to a Volcarona which, in addition to instantly vaporizing creatures vulnerable to sunlight unless they succeed on a Fortitude save, does 1d6 fire damage per HD of the Magihexy per round to all creatures within its radius. Initiating the Fiery Dance requires a standard action, and sustaining it requires a move action. When Magihexy stops actively sustaining it, it ends after a number of rounds equal to Magihexy's Charisma bonus.