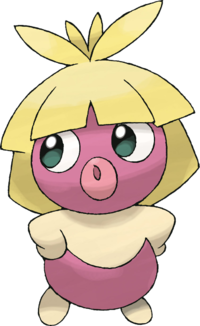 This creature vaguely resembles a young human girl. However, its lips are much too big to be entirely natural, and its skin is an odd purplish hue.

Smoochum is the juvenile form of Jynx, a snow maiden-like Pokémon.

Smoochum is relatively weak in combat, but it does have cyrokinesis and psionic powers to battle with if it must.

Unlike its older forms, Smoochum is too young and immature to fully utilize its abilities, and it does not have access to any bardic powers. It still has some special abilities to get by with, but not as much as its evolved forms. Overall, Smoochum isn't that much of a challenge for a party of the appropriate level (especially since it makes Voltran look resilient in comparison).

Egg Move: Smoochum hatches knowing one of the following moves:

Lick (Su): Smoochum can use its tongue as a natural weapon, steeped in supernatural energies. It may attempt to lick a foe as a melee attack. If it hits, it does 1d4 negative energy damage (plus or minus Smoochum's Strength modifier) and numbs the foe for the rest of the encounter. A Fortitude save (DC = 10 + ½ Smoochum's HD + Smoochum's Charisma modifier) can negate the numbing but not the damage. This is a [Ghost] effect.

The sample Smoochum does 1d4-2 damage with its lick, and the DC to avoid being numbed is 15.

Sweet Kiss (Su): As a standard action, Smoochum may attempt to kiss a foe. This is treated as a melee touch attack. If Smoochum connects, the foe must succeed on a Will save (DC = 10 + ½ Smoochum's HD + Smoochum's Charisma modifier) or become confused, as the spell, for 2d4-1 rounds.

Powder Snow (Sp): As a standard action, Smoochum may generate a snowstorm that covers a sphere with a radius of 10 feet per 4 Hit Die (minimum 10 feet), centered on Smoochum itself. This snowstorm does 1d4 cold damage per 2 Hit Die Smoochum possesses (maximum 10d4 at 20 HD) to all within range, with a Fortitude save (DC 16) allowed for half damage. This ability is the equivalent of a 3rd-level spell, and its DC is calculated accordingly; the save DC is Charisma-based.

Confusion (Psi): Smoochum may manifest confusion, as the spell, as a psi-like ability at will. This psionic assault also does 1d4 damage to the opponent. A successful Will save (calculated as normal for a confusion spell) can negate the confusion but not the damage. This is a [Psychic] effect.

Sing (Su): Once per day per Hit Die, Smoochum can sing a calming lullaby as a standard action, maintaining the effect as a standard action for up to 1 round per Hit Die. Each round that Smoochum continues singing, it makes a Perform check, and all creatures within 10 feet per Hit Die that can hear Smoochum must succeed on a Will save (DC equal to Smoochum's Perform check) or immediately fall asleep. Affected creatures remain asleep until Smoochum stops singing and for a number of rounds afterwards equal to Smoochum's Charisma modifier.

Heart Stamp (Su): If Smoochum is psionically focused, it may expend its psionic focus to apply the Stunning Fist feat to a slam attack; a foe struck by this slam attack must succeed on a Wisdom-based Fortitude save or be stunned for 1 round. The slam attack enhanced by Heart Stamp may also affect incorporeal creatures as though it had the ghost touch property. This is a [Psychic] effect.

Fake Tears (Su): As a standard action, Smoochum can pretend to cry, in order to guilt-trip foes into going easy on it. It can maintain this effect as a standard action (treat this as concentrating on a spell, equivalent to 2nd level). All who see or hear Smoochum "crying" must succeed on a Will save (DC = 10 + ½ Smoochum's HD + Smoochum's Charisma modifier) or take a −4 morale penalty to all saving throws for as long as Smoochum continues crying and for a number of rounds afterwards equal to Smoochum's Charisma modifier (minimum 1 round after the crying stops.) This is a mind-affecting effect, and creatures unable to see and hear Smoochum are unaffected. This is a [Dark] effect.

Smoochum can evolve into Jynx starting at 6 HD, but if it does, it permanently loses out on the chance to learn some of its own advanced techniques, exclusive to this stage of its development. (Magihexy regains the ability to learn some of these techniques, but others are permanently lost if the evolution to the Jynx stage is not delayed.) Overall, Smoochum seems to be more in tune with its psionic capabilities than Jynx is, while Jynx is more musically-minded; the line's ultimate form, Magihexy, blends Smoochum's psionics and Jynx's music into a seamless whole.

At 7 HD, Smoochum learns Lucky Chant (Su). By singing and dancing, Smoochum may render itself and all allies within 60 feet of it completely immune to all critical hits. Initiating this is a standard action, and it can be sustained with additional standard actions for up to one round per Hit Die. Smoochum may use this or Sing in any combination of once per day per hit die - they both draw from the same pool of supernatural potential, which isn't fully realized until it evolves into Jynx. This technique cannot be learned by Jynx (though Magihexy regains the ability to learn it), but it can be retained if learned as a Smoochum (in which case it will become a bardic music effect along with Sing).

At 9 HD, Smoochum learns Avalanche (Ex). Whenever Smoochum takes damage in a round, its slam attack does double damage for the rest of that round. This is an [Ice] effect.

At 11 HD, Smoochum learns Psychic (Psi). This potent psionic attack violently assaults a single target with raw psionic force that deals 2d6 damage per Hit Die. Smoochum's target is allowed a Will save (DC = 10 + ½ Smoochum's HD + Smoochum's Charisma modifier) to halve the damage. This is a [Psychic] effect. This technique cannot be learned by Jynx (though Magihexy regains the ability to learn it), but it can be retained if learned as a Smoochum.

At 13 HD, Smoochum learns Copycat (Psi). It can replicate the effect of any spell, power, or other special ability it has witnessed within the last round, assuming it can provide the necessary components and the ability requires less than 1 full round to perform. However, this does not guarantee that Smoochum's version of the technique won't be a complete and utter joke, as Smoochum does not gain any logical prerequisites for the technique it chooses (such as a serpentine body for constriction), and its technique will fail if it cannot find a way to improvise. Smoochum can only imitate a technique once with Copycat; afterwards, it must witness the technique again in order to reuse it. Neither Jynx nor Magihexy can learn this technique, though both can retain it if they learned it as a Smoochum.

At 14 HD, Smoochum learns Perish Song (Su). At Smoochum's option, instead of serving as a calming lullaby, its song may foretell a great loss, and those who hear it risk death itself. All who hear this song must make a Will save (DC = 10 + ½ Smoochum's HD + Smoochum's Wisdom modifier). If they fail, they become shaken as they realize their life is going to be cut short. If, two rounds later, they can still hear the song, they are instantly slain.

A Smoochum can end this by no longer singing, and can sing to counter another perish song (including that of a Pokémon not belonging to its own evolutionary line, such as a Lapras or Politoed). To begin singing this requires a standard action, but to continue merely takes a Swift action. Perish Song may be used at will, for it incurs its own cost; if Smoochum does not stop singing after three consecutive rounds, it too passes away from its own song.

At 15 HD, Smoochum learns blizzard, which is usable as a spell-like ability usable once per day. This is treated as an [Ice] effect.