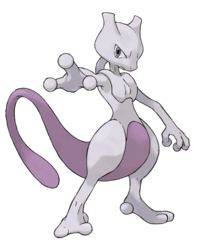 Mewtwo was created by an experiment with simulacrum gone horribly wrong. Team Rocket sent a team of adventurers that acquired a single eyelash from the legendary Pokemon Mew from a temple located deep in the jungle. They used the high-wizard Fuji to create a new Mew, one that would be as powerful as, or perhaps more powerful than, the legendary mother of all Pokémon.

The wizard Fuji used innovative techniques that allowed him to cast a simulacrum that vastly exceeded expectations. The first subject of his experiments was his own daughter Ai, who had died in an accident. And while the initial results seemed promising, Ai had hidden defects that made her inherently unstable - and she eventually crumbled into the snow she was composed of. More than a copy, Mewtwo exceeded the power of the original, but he also exceeded Fuji's powers to control.

New to life, Mewtwo befriended Fuji's daughter. Fuji and Team Rocket had other plans for Mewtwo, and taught him to use his formidable powers to kill, and Mewtwo played with Ai only in secret.

When Ai became sick and dissolved, Mewtwo blamed himself and was torn with grief. Angry at the world for allowing Ai to die, angry at his creators, and most of all angry at himself for "killing" Ai - Mewtwo unleashed a wave of unfettered vengeance upon his creators. Mewtwo destroyed the wizard Fuji and his assistants, he demolished Fuji's tower, and he slew the leader of Team Rocket. Now the only people who even know that Mewtwo exists are the remaining adventurers who penetrated the Temple of Mew so many years ago.

Mewtwo is violently insane. He is well aware of the fact that he can destroy almost all creatures with a thought. He is extremely overconfident, and usually plays with his adversaries. If Mewtwo considers an opponent to be even vaguely challenging, he will usually take time to imprison and taunt them. Opponents which Mewtwo does not feel are "worthy" usually get overwhelming force applied to them. While Mewtwo loves to talk, he is not big on listening. Unless someone is extremely persuasive (Diplomacy DC 50), Mewtwo will only listen to Mew or Ai. Mew probably no longer exists, and Ai is not only dead - but never truly lived in the first place.

Telekinesis (Su): Mewtwo can psychically manipulate objects without conscious thought. Any number of objects within 1600 ft. of him totaling 6 tonnes in weight can be moved 20 feet per round by Mewtwo. Mewtwo may move separate objects in different directions. Mewtwo can force open doors or bull rush creatures in his general vicinity as if he was a Medium sized creature with a Strength equal to his Intelligence. He can only act on each creature or object once per round, but it does not require any action on his part to do so.

The save DC for Mewtwo's Telekinesis is 36, and rises to 40 while in the armor.

Mewtwo can cast 8 Epic spells every day, 4 as a Sorcerer, 4 Psychically. Mewtwo's Epic level spells are:

Mass Devastation: Inflicts 35d6 damage (Fortitude half) on all creatures and objects within 1200 ft. of the caster except the caster and his equipment. Mass Devastation damages articles of clothing and equipment separately and specifically, so even the survivors will generally be naked. Any creature reduced to -10 hit points is also reduced to dust. Spellcraft DC 74.

Steal All Pokémon: The caster summons a grip of temporary Ultraballs, which seek out and grab all Pokémon (even controlled Pokémon) within 1200 ft. of the caster. All Pokéballs last for 24 hours, and Pokémon caught in them cannot be recalled into their original Pokéballs. If a Pokémon is not captured by the Ultraballs, it is automatically struck with another one in 1d4 rounds unless it escapes the area of effect. DC 74.

Clone Portal: The caster designates two 10 ft. diameter circles. Any creature that passes through one of the circles has a Simulacrum created out of the other circle. The Simulacrum is controlled by the caster. DC 78.

Telepathy (Su): Mewtwo can communicate telepathically with any creature within 200 ft. of it which has a language.

Mind Blast (Sp): This attack is a cone 60 feet long. Anyone caught in this cone must make a Will save (DC 14 + charisma bonus) or be stunned for 3d4 rounds. Mewtwo can mind blast once per round as a free action; this is in addition to his quickened spells. Mewtwo's save DC for mind blast is 26, but when he is wearing the armor, it rises to 29.

Pokémaster: Mewtwo is a 12th level Pokémaster, with a caster level of 28.

Armored in Life (Su): Mewtwo protects himself with forcefields from his mind. Mewtwo has a Luck bonus to AC equal to his charisma bonus.

Mewtwo's Armor: Giovanni, the former leader of Team Rocket, commissioned a power suit of armor for Mewtwo. The armor was designed to augment his already-powerful psychic abilities. It was hoped that the armor, and Mewtwo himself, would conquer the world for Team Rocket. Mewtwo may yet conquer the world, but upon discovering the power of the armor, he instead killed everyone who was involved in any way with its production.

The secrets of constructing Mewtwo's armor are lost, but it remains a potent artifact. It is modular, and fashioned out of mithril and ioun stone. It is the equivalent of +7 Platemail (specially fitted for Mewtwo). The armor reacts to the wearer's movements, and does not restrict maximum movement or lower speed in any way (although it is still bulky and has an armor check penalty of −2).

If advanced to character level 30, Mewtwo learns Aura Sphere (Su). This is a move in which Mewtwo can briefly expand his aura, once per minute. All within 10' are automatically struck for 1d8 Force damage per level. (Mewtwo does more damage with its Aura Sphere than most other Pokémon because of his immense psionic power.) Aura Sphere is a [Fighting] effect.