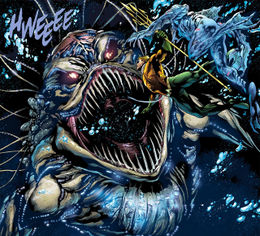 Your biomass will be added to their own.

This giant is barely human-looking, its skin transparent and runny like jelly, its blank eyes and organs glowing with a fell light, and its mouth filled with needle-like teeth.

Just as giants exist on land, there are giants of the sea as well. The neria are the giants of mer-kind, and hadal neria are those that sunk into the deepest lightness depths of the ocean, a land which warped their bodies into the abominations which they are today. They are one of the two direct descendants of the primal oceanic nerias. In ancient times the primal race was one, but a great war broke out over an unknown cause. The hadal lost the war and were brought into exile, sinking into the lightless depths. There they stayed, unheard for eons until they began to surface changed and distorted. In their exile they became experts in fleshcraft and made pacts and prophecy with unknown, forbidden spirits. Their society follows "the path of the stars below", a prophecy which speaks of their return to dominance, and all actions they do further the progression along the path. It would be easily dismissed as a story, were it not lined up with several terrifying other forbidden tomes which speak of the return of elder evils and world ending events. The manner of spirits the hadal follow are thus brought into question.

The darkness of the trenches has not been kind to hadal neria's appearance. They barely retain their humanoid form, with a head resembling an anglerfish, eyes blank and bulbous, mouth agape with countless sharp spines for teeth, and skin as runny mucus, transparent and foul. Their body shimmers with bio-luminescence, and countless unknown organs seem to swim inside their watery bodies in impossible ways. They have the humanoid upper half, and their tail extends into that resembling an eel. Within their mouths is a long tongue which has more in common with a bobbit worm than anything that can be called a tongue. With their love of fleshcraft, many possess many other organs, limbs, and abilities. Their clerics, the messengers of the dark, almost always possess tentacles sprouting from various parts of their body among any other augmentations. Hadal neria prefer natural weapons above all else, a practice which may seem savage, but is merely pride for the hadal. For the hadal are disturbingly smart and sophisticated, simply utterly alien and merciless.

Hadal neria are rarely seen on the surface due to their biological limitations in such an environment, but on the darkness nights they rise and consult the stars above with the knowledge of "the stars below", as well as bring many a sacrifice down upon their return.

A hadal neria speaks Undercommon, Giant, Aquan, and Aboleth, and usually several other languages with their high intelligence. They are a massive 30 ft tall "standing" (90 ft from head to tail) and weighing 360,000 lbs.

Hadal neria are a force to be reckoned with, and the hadal know this. They come under cover of darkness and storm, and let their horrifying presence clear out undesirables for them. Those that remain, or those they are hunting, are subject to both powerful spells and powerful attacks. The biggest threat is that of their foul disease, and being swallowed whole. While multiple hadal usually surface in a night, they fortunately tend to work with just themselves and a host of aberrations, calling for assistance from other hadal neria only when needed.

Aberrant Biology (Ex): Hadal neria are practically aberrations, to the point of counting as an aberration when beneficial. They are also treated as having the Aberrant BloodLoM feat for the purposes of feats and pre-requisites. Lastly, hadal neria possess 50% fortification as their organs constantly shift and move and do things that should not be.

Blindsense (Ex): Hadal neria have an echolocation which gives them blindsense out to 1000 ft in water, but only 100 ft in air.

Capsize (Ex): Hadal neria can topple ships up to one size larger than them, causing the ship to sway and possibly tip over. The hadal neria must make a touch attack at the end of a charge against a seafaring vehicle, and then make a special strength check (1d20 + BAB + Strength) opposed by the Profession (Sailor) check of the vehicle (+ or -4 for each size larger or smaller than Huge). If successful, the ship rocks violently dealing half the hadal neria's slam damage to all creatures in the vehicle and forcing balance against falling prone and concentration checks equal to the result for creatures on the ship. If you beat the opposed roll by 10 or more, the ship capsizes completely and turns upside down. A capsized ship is completely disabled, and while air trapped under the ship can keep it afloat for a few days or weeks, it is almost impossible to turn right side up. Eventually, capsized ships will sink and slip under the waves.

Disease (Su): Hadal neria carry a potent virus called Jellyskin Rot which converts biomass into a substance very similar to their skin, and not unlike the mucus membrane of an aboleth. Though it is a disease, it is supernaturally potent and onset is immediate and rapid, effecting the creature each round. The disease has three stages of severity, and it takes two consecutive saves to raise your condition up one stage.

In the first stage, creatures are fatigued as they begin to experience symptoms similar to water intoxication. Cells begin to swell, and muscles begin to weaken due to eletrochemical imbalance.

If a second save is failed while the first is in effect, their skin begins to turn translucent and pale. If the creature had natural armor, they take a 1d6 penalty to damage reduction and natural armor. If they have no natural armor remaining (or never had any) the remainder becomes a penalty to AC.

If a third save is failed, the creature becomes exhausted and their skin begins to slough off, dealing 1d6 nonlethal damage every round. Magical healing, or a Heal check as a standard action (DC 20) can stop the damage, but it immediately goes back into effect if the creature takes any damage.

The DC is a Fortitude save which is Constitution based, and is transmitted via the hook tongue, and being swallowed whole.

Horrifying Presence (Su): Hadal neria can inspire terror by charging or attacking. Affected creatures must succeed on a Will save or become shaken, and a Fortitude save or become sickened, remaining in that condition as long as they remain with 60 feet of the hadal neria. A successful save gives immunity to that hadal neria's horrifying presence for 24 hours (shaken and sickened are treated separately). The save DC is Charisma-based.

Improved Grab (Ex): To use this ability, the hadal neria must hit a Large or smaller opponent with its bite attack. It can then attempt to start a grapple as a free action without provoking an attack of opportunity. If it wins the grapple check, it establishes a hold and can try to swallow the foe the following round.

Parasite Host (Ex): Hadal neria is full of parasites and symbiotic worms and other flora and fauna. Those who are swallowed are dumped into a vat of squirming maggot-like worms which expose them to the disease Jellyskin Rot each round. Successful saves can only prevent the disease from progressing, it cannot be cured as long as you are exposed to the parasites.

When the hadal neria dies, it bursts in a disgusting swarm of parasites which persists for 10 minutes in the space of the former creature, providing difficult terrain, obscuring line of sight if in the water, and exposing any creature which passes through it to the disease.

Pressure Resistance (Ex): Hadal neria are immune to the effects of high pressure.

Slimy Body (Ex): Hadal neria are covered in a slimy film which is constantly shedding layers of skin. All negative status effects have their duration cut in half, and the hadal neria can take a full round action to purposefully shed its skin and remove one non-permanent or non-instantaneous status effect of its choice. It can split it over a duration of two rounds in case it is staggered or otherwise denied actions.

Surface Vulnerability (Ex): The hadal neria is not used to life on the surface, much less the low pressures of being exposed to air. While they augment their bodies to endure, a hadal neria can only last for 30 minutes per HD before it must return to its lightless deep waters. Failure to do so results taking 1d6 points of damage every round until they find shelter, and 2d6 in arid environments. They dry out twice as fast in arid environments.

Swallow Whole (Ex): The hadal neria can try to swallow a grabbed opponent of Large or smaller size by making a successful grapple check. Once inside, the opponent takes 2d6+7 points of crushing damage plus 2d6+7 points of acid damage per round from the hadal neria's digestive juices. A swallowed creature can cut its way out by dealing 35 points of damage (for normal) or 45 points of damage (for the messanger of the dark) to the hadal neria's digestive tract (AC 17 normal, AC 27 messenger of the dark). Once the creature exits, muscular action closes the hole; another swallowed opponent must cut its own way out. The hadal neria's gullet can hold 2 Large, 8 Medium, 32 Small, 128 Tiny, or 512 Diminutive or smaller creatures.

Vulnerability to Light (Ex): Hadal neria have a -2 penalty on [Light] spells, and take 50% additional damage from damaging [Light] spells.

Spells: Hadal neria messengers of the dark cast spells as 8th level clerics. A hadal neria has access to two of the following domains: Darkness, Destruction, Evil, Knowledge, Law, Magic, and Water (plus any others from its deity). The save DCs are Wisdom based.

Skills: Hadal neria has a +8 racial bonus on any Swim check to perform some special action or avoid a hazard. It can always choose to take 10 on a Swim check, even if distracted or endangered. It can use the run action while swimming, provided it swims in a straight line.