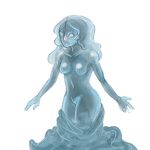 An oobleck imitating a female humanoid.

The oobleck are a rare sapient form of ooze, capable of speech and thought. They do not exist as a unified race but as a rare mutation seemingly caused by the consumption of a sentient being by an ooze, followed by its reproduction. The resulting new slime may turn out to be an oobleck, which slowly matures with basic intelligence and memories, soon to go out seeking the meaning of its life in the outside world.

The oobleck are fantastically curious, most growing up surrounded by mindless siblings and uncertain why they alone possess intellect. They often feel compelled to leave and explore, finding company in others who might accept them. Unfortunately for the oobleck, this is rarely a warm welcome and many oobleck die approaching humanoids in a far too friendly manner. Those which are not killed or driven from society quickly try to settle in where they can and adapt, though they are filled with wanderlust whenever discovering that there is more beyond the world they know. It is no surprise that one could say the entire population of ooblecks are adventurer material.

Ooblecks are nothing but vaguely ovid blobs of colored slime in their natural, resting state, but when "awake" and active they form into a vaguely humanoid shape. Their shape appears to be genetically pre-determined and the nature of their features and where, or why they appear as they do are a mystery. Always translucent, a sharp eye can pick out a central cluster of organs which serves as the core of the oobleck, as well as its sensory organs and brain. They are highly resistant to damage, and while slow they are usually dangerous to the touch. Unfortunately for many oobleck, they often do not realize their bodies are caustic when first coming into contact with other creatures.

Oobleck are gender neutral genetically but they assign themselves a mental gender which their physical form often assumes as well. They reproduce by splitting when they get too large, usually budding mindless slimes and rarely budding another oobleck without the need to consume sentient creatures.

Oobleck are rarely well received since their first reaction is to reach out and touch the new and interesting people, accidentally digesting them in the process. This, combined with their rarity means most have never heard of an oobleck, and if they have they would have assumed it some manner of normal slime.

Oobleck are almost universally true neutral, for few have had experience enough to alter their alignment any meaningful way.

The oobleck are found in places where slimes roam... moist, dark caves, forgotten dungeons, and filth covered sewers. These places are home, and the oobleck is even more adaptable in where it can live. However, all find arid deserts to be rather painful, as their bodies rely on a heavy amount of moisture.

The oobleck rarely worship, most being ignorant of religion. Those that do worship have often become priests of the demon lord of slime, Jubliex, for only the demon lord truly understands what they are and their kind.

Oobleck speak Common and understand and communicate in the chemical-based language of slimes. This does not help them much as most slimes are mindless and the only communication they ever receive are messages such as "hungry" and "food this way". Even so, this knowledge allows them to use Handle Animal checks to influence the behavior of oozes.

The oobleck rarely name themselves, and instead pick up nicknames from others who accept them. As such, names lean towards one word "pet names" like Slimer, Flan, and Jello.