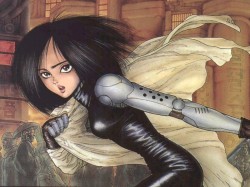 Those spellborged may show signs of their artificial implants. And sometimes they are more man than machines...

The creature before you seems to have had artificial grafts applied to their body. Its arms are plated with steel and stone, and magical energy flickers under its surface.

As cyborgs are organic beings fused with technological aspects, spellborgs fuse magical items into their form, becoming partly a magic item in themselves. The extent of a visual change varies wildly. Some spellborgs almost seem to be constructs, while others have their changes completely internal. In all cases, the modified creature possesses unique benefits over its fellow kin.

This is an acquired template that can be applied to any corporeal creature. Magical items are fused into the body by a unique ritual. The exact nature of the ritual is set by the DM. By default it requires some strange and unusual circumstance to its acquisition, but if your DM permits it the template to be something one can purchase like magical gear. It is suggested that a single LA 1 application cost either 3000 xp (the cost buy off the LA) or 15,000g (x5 the cost of XP). Each additional LA would cost +3000 xp or +15,000g more (so 6000, 9000, 12000 xp and so forth, and 30k, 45k, 60k, and so forth). You may choose up to three benefits from the list of alterations below. Its visual appearance varies.

All of the effects given below are supernatural abilities, and are suppressed in an antimagic field unless otherwise noted. While they stem from magic items inside your body, they cannot be sundered or disjointed as they have become part of your living structure.

You may choose one or more of the following movement altering powers:

Improved Acceleration: By implanting magical devices in your legs, your base land speed increases by 10 ft. plus an additional +10 ft. at 8 HD and 16 HD (up to +30 ft.). You never tire or take nonlethal damage by constant running, and can run through non-magical difficult terrain. Magically augmented terrain, such as an entangle spell, still inhibit you as normal.

Flight: You acquire limited flight, allowing you automatic feather fall effect when dropping. At 5 HD, you gain a flight speed of twice your land speed with an average maneuverability. Wings may be visible on the subject. If taken multiple times, the maneuverability rises by one step (to good, and then to perfect).

Aquatic: You acquire a swim speed equal to your land speed, and are able to breath both air and water. You do not suffer the effects of high pressure. This is an extraordinary ability. 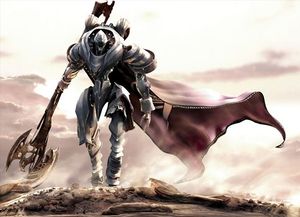 A spellborg with armored skin.

You may choose one or more of the following AC altering powers:

Armored Skin: You gain +1 natural armor bonus to your AC at 1 HD and every 4 HD beyond (4th, 8th, 12th, etc). This is an enhancement bonus, and does not stack with spells such as barkskin.

Force Shell: You gain a +1 deflection bonus to your AC at 1 HD and every 6 HD beyond (6th, 12th, 18th, etc). This does not stack with other deflection bonuses. You are also immune to magic missiles as per the Shield spell.

Heightened Reflexes: You gain +2 dodge bonus to your AC and are never flatfooted on a surprise round or first round of combat, even if you have not acted yet.

You may choose one or more of the following special attacks:

Weapon Grade Fists: Your body becomes a weapon, such as through the hardening of the knuckles, or improvements in your natural weapons. One natural weapon of your choice or your unarmed strike can now be enchanted as if it were a weapon, and can have a single material applied to it (the cost being spent at time of acquiring the template). This enables you to have adamantine fists, or mithril horns, if so crafted. Unlike other abilities, this ability is (Ex) and remains in an antimagic field.

Internal Weapons: You may embed light or one-handed weapons into your body, such as claws or an arm-blade for an embedded sword. You can no longer be disarmed, and may store the weapon folded into your frame. Your hand is not free when the weapon is out, you must still "carry" it. You get a +20 to Sleight of Hand checks made to hide the weapon. Ranged weapons such as crossbows may store their quiver internally as well. If the opponent does not realized you are armed before attacking, all your attacks in the first round of combat treat the target as flatfooted. When this supernatural ability is suppressed, the weapon folds out and cannot be stored, but does not go away. Drawing or sheathing an embedded weapon is a free action that does not provoke an attack of opportunity.

Energy Fist: You gain a special touch attack that deals 1d6 per HD + your casting ability (default Cha for non-casters) in damage. The damage is either fire, electric, cold, or acid, chosen when the template is acquired. This requires a standard action.

You may choose one or more of the following special qualities:

Armor Grade Frame: Your skeleton or skin is improved through the application of magical materials. You have an effective armor bonus of +2, 5% arcane spell failure, and no armor check penalty or max dex bonus. You may enchant yourself as a suit of armor in the same manner as a warforged. You may now also take warforged armor feats to change this to mithril, adamantine, and more, ignoring the 1st level requirement. Unlike other abilities, this ability is (Ex) and remains in an antimagic field.

Adaptation: You have adapted to the magical implements inside your body. These implements have become a normal part of your physiology. Choose 2 of your Spellborg abilities. These abilities become Extraordinary instead of Supernatural. You may select this more than once, each time choosing 2 of your existing Spellborg abilities to become Extraordinary instead of Supernatural.

Construct Build: You gain hit points according to your size as a construct, in addition to your usual total from your Con score. In addition, when you drop below 0 hp and are dying, your automatically stabilize. Lastly, you are able to use warforged components and items for constructs only. Unlike other abilities, this ability is (Ex) and remains in an antimagic field.

Damage Control: Magic reduces the force of blows taken on you, granting you DR/magic equal to your HD. Alternatively you can choose to have DR/material (either adamantine, cold iron, or silver) equal to half your HD.

Energy Saver: You gain the effects of the ring of sustenance. In addition, you may shut down your body, becoming helpless, with no breathing, eating, and aging very slowly at 1 year equal to the passing of 1 day. Falling comatose and waking up is a standard action. It takes a DC 20 Heal check to realize you are not dead.

Expanded Ability: You gain a bonus feat. You may only select this once, no matter how many spellborg templates you possess. Unlike other abilities, this ability is actually (Ex) and remains in an antimagic field. You must qualify for the feat as normal.

Failsafe Trigger: You gain a unit inside your body which functions as a ring of spell storing. 1 round after you drop below 0 hp, the spell inside goes off, targeted upon you (or if an area effect, centered upon you). Your body must be intact for this to function, so being disintegrated would destroy the failsafe. Typically it is a cure spell, but sometimes it is an attack. You may store any spell level you would be able to cast as a wizard of your HD. That is, a 5 HD spellborg can only store up to 3rd level spells, while a 17th level may store up to 9th level spells. Regardless, the trigger only functions 1/day, and cannot be reloaded until the next day.

A dispel or mage's disjuntion can target and remove the spell from the failsafe trigger's storage. It can be purposefully emptied (and the spell wasted) as a standard action. This does not actually give you spellcasting if you don't possess it, you must find spells to fill your failsafe ability with.

Fortified Build: You acquire protection against critical hits and sneak attacks. You have the equivalent of light fortification (DMG). You may choose to take this ability up to three times, each time increasing the level of fortification (2x = medium fortification, 3x = heavy fortification).

Hammerspace: Your body effectively becomes a Type 1 Bag of Holding, able to store items in its extradimensional space by some manner of entry. Unlike most bags of holding, this one cannot be ruptured and can be taken into other dimensional spaces. However, the magic is suppressed in such a situation as if it were in an antimagic field, and the bag cannot be accessed. Other dimensional spaces may be held within it without threat of disruption. Like a Handy Haversack the item you need is always on top.

Ironguts: You become immune to magical and mundane disease and poisons.

Restoration: 1/day you may recover your 5 hp/HD as a immediate action due to the emergancy energy reserves inside.

Self-Recovery: You gain Fast Healing 1 as the magic in your body pieces you back together.

Third Ring: The magical leylines of your body are altered, permitting you to wear and benefit from the affects of an additional ring.

Vision Enhancement: You gain Low-Light Vision and Darkvision out to 60 ft. If you already possess one or both qualities, their ranges are extended by +60 ft.

You may choose one or more of the following special abilities:

Increased Ability: You gain a +2 bonus to two of your ability scores. Bonuses from this template do not stack.

Increased Ability: You gain a +4 bonus to one of your ability scores. Bonuses from this template do not stack.

You may choose one or more of the following skill bonuses:

Embedded Tool: You gain a +10 inherent bonus to a single skill. For example, you may possess magical internal lockpicks for bonuses to your Open Lock skill, or improved internal gyros for your tumble skill.

Continuous Search: +4 bonus on Listen, Search, and Spot checks, and they are always class skills. You are in constant search mode as the elf racial ability. Those who merely pass within 5 feet of a secret or concealed door is entitled to a Search check to notice it as if she were actively looking for it. If subject to a trap due to a missed search check, they gain half their HD as a bonus on AC or saves against the trap.

Sensitivity: Due to greater danger sense, you gain a +4 bonus to initiative checks.

Stability: Due to your heavy frame, your are more stable than most, gaining a +4 checks to resist bull rushes, trip attempts, and other attempts which move you. As a standard action you can plant yourself down in any solid floor (such as stone and metal, but not sand) and become impossible to move. In such a state, you gain 10 temporary hp, which is refreshed each round. Temporary hp overlaps, it does not stack.

+1 This template may be taken multiple times, each time you add 3 different benefits. You cannot choose the same benefit more than once (benefits do not stack) but certain abilities allow you to apply it to a different function (such as an embedded tool for another skill).