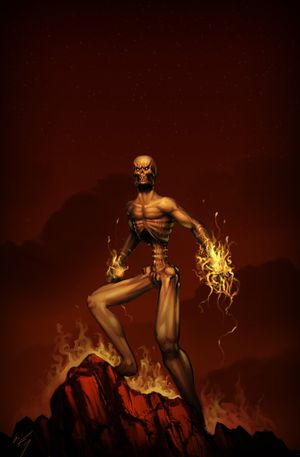 Standing atop a pile of defeated bone devils you finally breath a sigh of relief, and start wiping your blade of blood. From its reflection you make out a emaciated-looking, yellowish-skinned humanoid figure... it looks like you missed one of the fiendish bastards, but as you turn to slay your opponent, one of the hands in the corpse pile rises and grabs your leg...

Arch-viles are the worst of the worst, a nightmare when seen upon the battlefields both fiendish and abyssal, where the armies love them for their dark talents. Emaciated-looking, yellowish-skinned humanoid figures whose abdomens have rotten clean, exposing their ribcage and whose hands are wrought with stigmata that weep hellfire instead of blood, these terrible yugoloths are capable of reviving the fallen dead in an instant, transforming a simple battle into an endless fight as you desperately try to down the arch-vile admist a sea of recently slain opponents.

Because of their connection with hellfire, some have speculated arch-viles are the work of Mephistopheles, gone errant.

Archviles are tough fiends which often sell themselves into service for both demon and devil, laughing as the fiendish foes pummel each other endlessly, only to be ressurected for another life of suffering. They stay within swarms of other opponents, using them as meat shields, and restoring them to life the moment they fall. When well protected they spam Hellflame Strike to drop their opponents prone so the armies may amass upon them, and spell-like abilities when the need arises.

Burn (Su): Constantly bleeding hellfire from their palms, an arch-vile deals an additional 1d6 hellfire damage on its claw attacks. Unlike normal fire, hellfire is not reduced or prevented by fire resistance or immunity. It does still burn however, and those struck must succeed on a DC 22 Reflex save or catch on fire. The flame burns for 1d4 rounds. A burning creature can take a move action to put out the flame. The save DC is Constitution-based.

Hellflame Strike (Sp): At will, an arch-vile may summon a pillar of flame from the ground. This is identical to flame strike except the flame appears from the ground and it deals half fire damage, and half hellfire damage. Those struck by the flames are lifted off their feet, and must make an additional Reflex save or fall prone. The caster level equals the HD of the creature save DC is Charisma-based. The particular example here deals 12d6 with a DC 21 Reflex save.

Respawn (Su): As a full-round action at will, an arch-vile may revive any slain creature within 30 ft. restoring them to half their original hit points, with no level loss, and able to act immediately. They cannot revive a creature whose HD exceed their own. The only reason the lower planes has not been overrun with revived troops is that an arch-vile may only sustain 2 respawned creature per HD. Thus a 12 HD arch-vile can keep 24 respawned creatures alive at once, if it respawns another creature it must choose to recover its power from one of the currently revived creatures (killing it).

Summon Yugoloth (Sp): 1/day, an arch-vile may attempt to summon 1 other arch-vile or 1d4 canolothsMM3 with a 40% chance of success. The summon remains for 1 hour, and summons cannot use their own summon ability. Arch-viles are loath to call on each other, as if they die in combat they will surely be respawned, and thus at the whim and mercy, of another arch-vile.