This is a monster from Liber Demonica. You might be looking for the balor. 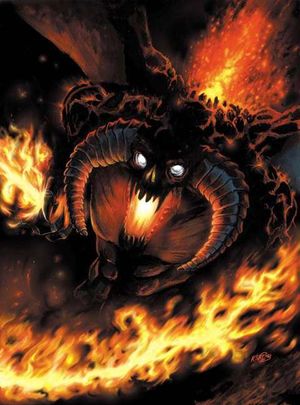 You know all those demons you've been having nightmares about? I'm the worst one.

This creature’s 12-foot tall, coal-black body is wreathed entirely in black and red flames, giving off an acrid odor that reaches you even from your impressive distance. It’s massive hands carry a gigantic sword and a long, flaming whip, both of which burn with the same fire that covers the rest of its body. Its massive, winged form is topped with the horns of a ram, and piercing eyes that appear like the molten pools of a volcano. They certainly promise a death no less painful.

Balors are the undisputed masters of most daily operations in the Abyss, the emissaries of the demon lords (or even existing as minor demon lords themselves). It doesn’t take a genius to realize that it’s based off of Tolkien’s Balrog, a demon far beyond the might of any members of the Fellowship save Gandalf. So you know it’s got to be some serious shit.

Balors are cruel and scheming creatures who have in many cases worked their way to their current form from a lower rank of demon, and now seek only to increase their own power and eventually gain enough strength to break free of their Abyss-granted form in order to create one of their choosing (the typical mark of a demon lord). While they do have some excellent abilities to destroy parties (look no further than natural flight and blasphemy as an at-will spell-like ability), Wizard-level parties press even its abilities to the limit. So in keeping with these new, higher standards for Challenge Rating, the balor needs a new look as well.

A balor is excellent in all forms of combat; it may wield both its whip and sword with no penalties to attack rolls. It has the option to deal either lethal or nonlethal damage when using the whip, which strikes with an additional 10 feet of reach than normal. It may also use its potent array of spell-like abilities to debilitate foes from distance, but it rarely shies from melee when the opportunity presents itself.

In fact, its power is so great that few casters dare to actually summon a balor. The generals of demonkind possess powers beyond the ken of even many great heroes, and it has a vast array of powers that allow it to dominate most encounters.

Aura of Primal Emotion (Ex): Balors project an aura of awe. This special aura has the same effect as a command spell, with the command to fall prone for all in the area. Additionally, it affects mortals out to Medium range instead of Close. The save DC for this aura is 29.

Death Throes (Ex): Upon the balor’s death, it explodes in a brilliant flash of light. This deals 100 points of damage to all creatures within 50ft, with a DC 31 Reflex save for half (Con-based). Additionally, any creature that can see the balor explode in this manner becomes blinded for 1 minute.

Flaming Body (Ex): A balor’s form is surrounded by abyssal flame that deals 1d6 points of damage per two points of CR it possesses (10d6 by default) to any creature within its melee reach. This damage is also added to all hits from the balor's melee weapons (this damage is not multiplied on a critical hit). Any wounds dealt by this ability are scorched black, disrupting a creature’s natural healing, fast healing or regeneration (whichever are applicable) and making the wounds impossible to heal through magical means unless the caster succeeds on a caster level check (DC 31). Any creature slain by the balor's attacks is immolated by these flames, destroying their material body and making them impossible to raise by any effect that requires their remains.

In addition to its offensive abilities, these flames also grant the balor immunity to fire and cold damage (as if it was under the effect of a fire shield spell as well as the constant effects of an cloak of chaos spell.

The Invasion (Su): As a leader of demonkind, the balor has the ability to summon other demons to his aid. As a standard action usable once every ten minutes, the balor may summon a marilith; two nalfeshnees or glabrezu; four bebiliths or hezrou; eight vrocks; sixteen succubi or babau; thirty-two dretches or quasits; or sixty-four manes. These demons are called, and thus, last indefinitely until slain or sent back to their home plane. They may also use any summoning or calling abilities that they have.

Tools of the Tyrant (Ex): The balor's sword and whip are tied to its being; should they ever be broken or dropped or the balor otherwise disarmed, they disappear, and the balor may summon new, identical weapons to its hands as a free action.

True Sight (Ex): A balor sees naturally as though it were under the effect of a true seeing spell.

Vorpal Sword (Ex): Any slashing weapon acts as if it possesses the vorpal enhancement in the hands of a balor. In addition, the balor may make a single attack as a standard action with this sword that strikes as an automatically confirmed critical hit (but not activating the vorpal enchantment) and forces the target to make a Fortitude save (DC 33) or die outright. This DC is Strength-based.

Whiplash (Ex): Once per round, the balor can force a single creature struck by its whip to make a Fortitude save (DC 33) or be paralyzed for 1 round The balor may declare the victim of this effect as a free action usable even out of turn. This DC is Strength-based.

The balor can also grapple an opponent that he hits with his whip as a free action, and drag them just into its melee reach as a swift action.