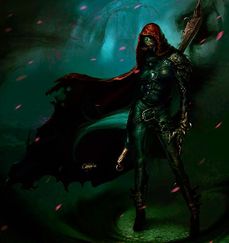 An eldritch agent readying for infiltration.

Eldritch agents are arcane masters of stealth. To them, stealth is more than just moving without being noticed. They intertwine a unique mastery of stealth within their very magic, to cast and enchant without being seen. The greatest eldritch agents have refined this ability to such heights that they can cast spells in plain sight without anyone noticing or tracing the effects back to them.

Characters that have talent in both versatile arcane spellcasting and stealth will ocasionally be recruited or inducted to secret agencies within magical society. These secret operatives that use the arcane arts and their versatile skill set for espionage and deep cover operations are called eldritch agents. Eldritch agents value a quickness of mind and body, and silence and secrecy are their greatest allies. As such, they benefit greatly from a high Dexterity and Intelligence. Charisma may be useful for those eldritch agents specializing in manipulation and cover operations, where social skills and sophistry are paramount.

All of the following are class features of the eldritch agent. WORK IN PROGRESS.

Spellcasting: At each level, you gain new spells per day and an increase in caster level (and spells known, if applicable) as if you had also gained a level in a prepared arcane spellcasting class to which you belonged before adding the prestige class level. You do not, however, gain any other benefit a character of that class would have gained. If you had more than one prepared arcane spellcasting class before becoming a eldritch agent, you must decide to which class to add each level for the purpose of determining spells per day, caster level, and spells known.

Darkvision (Ex): From spending most of her life in the dark places of the world, an eldritch agent has attained darkvision out to 60 feet.

Paramnesia (Ex): A 2nd level eldritch agent can use illusions in order to confound and befuddle her enemies, making them vulnerable to direct attack. Whenever a creature fails a Will save to disbelieve one of her illusion spells with a visual or auditory component, it loses its Dexterity bonus against the eldritch agent's attacks for one round. A creature so affected also takes a penalty to Listen checks if the spell has an auditory component, or a penalty to Spot checks if the spell has a visual component, or both if it has an auditory and a visual component. This penalty is equal the eldritch agent's class level. Creatures that are mindless are not subject to this ability.

At 7th level, the eldritch agent's paramnesia extends to her ability to move through the shadows. Performing an attack action right after using shadowstep forces the target to make a Will save or be denied its Dexterity bonus to AC against that attack.

Shadowstep (Sp): A eldritch agent of at least 3rd level is capable of flitting from shadow to shadow with supernatural grace and speed. When in an area of shadowy illumination or darkness, she may almost instantly move to another similarly illuminated square within visible range as a move action, by passing through the plane of shadow. This ability has a maximum range of 60 feet and may be used 3 times per day at 3rd level. A 6th-level eldritch agent may use shadowstep 3 times per hour, and a 9th-level eldritch agent may use shadowstep at will.

Shadowstep is the equivalent of a spell of the highest level you are capable of casting.

Still Spell: At 4th level, an eldritch agent gains the Still Spell feat. If she already possesses this feat, she may instead take another metamagic feat for which she meets the prerequisites.

Illusion Mastery: An eldritch agent trains herself to cast illusion magic with as few as possible discernible movements or signals. At 5th level, any spell of the illusion school she casts becomes automatically silent without sacrificing a higher level spell slot.

At 10th level, any illusion spell cast by the eldritch agent becomes automatically silent and still without sacrificing a higher level spell slot.

Evasion: Eldritch agents must always be heedful of magic of the flashier kind. At 6th level, she gains evasion. If she already has evasion from another source, such as levels in rogue, she gains improved evasion instead.

Subliminal Spell: An eldritch agent is a master at weaving spells in secret even while people are watching and listening. When casting a still spell, an 8th-level eldritch agent may embed the incantation of that spell within ordinary conversation, song, or other oral sounds. The eldritch agent makes a Bluff check to hide her spell, giving her a +2 circumstance bonus to save DC if successful. Observing creatures may make an opposed Sense Motive or Spellcraft check to notice that a spell is being cast. If a subliminally cast spell is an illusion or mind-affecting spell, or creates other innocuous non-damaging effects, the creatures remain unaware of the spell even if they successfully save against its effects.

Combat: Eldritch agents tend to stick to the background of any given situation, never straying too far from the shadows in which they can make a quick retreat if overwhelmed. When in single combat, they use their illusions to confound the enemy and create openings for them to exploit. When fighting as a team within a party, they create distractions and use their illusions to break enemy lines.

Advancement: An eldritch agent that masters her unique combat style to its fullest often chooses between attaining further focus on either spellcasting or stealth, returning to their basic roots of rogue or wizard. Some eldritch agents complement their expertise with levels in ranger with two-weapon combat style, to improve physical conditioning and basic martial prowess without sacrificing her generally high number of skills, and greatly boosting damage when they catch an opponent unaware.

Resources: Eldritch agents are used to working alone, as a single operative is much more difficult to uncover than a whole party. They are sneaky and self-sufficient, and are usually part of secret agencies of magical governments or paramilitary organizations that focus heavily on magic. They prefer communicating remotely using their spells, and rarely confront their accomplices face to face. Like with normal agents, an eldritch agent’s existence may be disavowed upon capture, depending on the work ethics of the organization in question.

Eldritch Agents in the World[edit]

Eldritch agents exist within the shadow of arcane society, assassinating rogue spellcasters and stealing sensitive information from competing wizarding guilds or houses. Their dual specialization makes them attractive hirelings or mercenaries. Many eldritch agents lead a double life, maintaining an inconspicuous cover by day and disappearing into the night to pursue their objective. Like any person of questionable occupation, eldritch agents thrive within the less lawful areas of the world, where they can blend with and disappear in the crowds more easily.

NPC Reactions: Eldritch agents operate in secrecy, using concealed messages and secret symbols and codes. Most onlookers wouldn’t be able to distinguish an eldritch agent from a rogue or a more hands-on spellcaster. When they are seen at all, they make extensive use of their disguise skill, and usually carry several sets of clothes to wear over their gear, with which to blend in with the appropriate crowd. As their skill in magic and stealth often compensates for the shortcomings in either skillset, eldritch agents have a notoriety for being very elusive, and very successful law breakers, and few would therefore choose to reveal their occupation.

Characters with ranks in Knowledge (local) can research eldritch agents to learn more about them. When a character makes a skill check, read or paraphrase the following, including information from lower DCs.