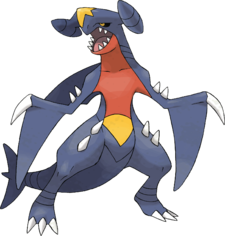 Garchomp from Diamond/Pearl/Platinum. It's much scarier than it looks.

What the heck is this thing... A shark? On land? How utterly ridic- OH MY GOD WHAT IS IT DOING TO MY TENDER FLESH?!?!?!?

It's hard to believe that this apex predator was once a wannabe Pac-Man. Now it's an engine of utter destruction that thoroughly violates its prey in ways that shouldn't even be possible. Garchomp can run so fast, it actually flies. Nobody is safe from this beast... Nobody.

Garchomp is everything that a monk wishes it was. It can cross massive distances in the blink of an eye and rip its prey apart before anyone can even realize what just happened, much less defend themselves. It has powerful special attacks and maneuver-like abilities, but its greatest asset by far is simply the fact that it's really, really, really ****ing fast. Getting 16 attacks in a single round is no problem for it - it can easily do 32. Garchomp is just plain unfair, and if you're unlucky enough to encounter it, you're utterly screwed unless you have enough raw power to put it down. Good luck – you're going to need it!!!!!!!!!

Sand Attack (Ex): A Garchomp can fling dust into the eyes of living opponents. A Sand Attack has a range of 25 feet plus 5 feet per two hit dice of the Garchomp. The victim must make a Reflex save (DC 10 + Garchomp's Con Modifier + Garchomp's Hit Dice); failure blinds the victim for 1d4 rounds plus one round per point of Constitution bonus the Garchomp has. (This is a very, very bad thing for Garchomp's opponents, as Garchomp will likely rip them apart in that time.)

Take Down (Ex): Garchomp may add 2d10 damage to any attack it makes as part of a charge. If it does, it takes 1d8 backlash damage. This is a [Normal] effect.

Backlash damage cannot be resisted by any means, and a creature killed by it loses 1 extra level/Hit Die if and when it is brought back to life.

Cut (Ex): The damage from Garchomp's slam attacks is treated as both slashing and bludgeoning (instead of just bludgeoning). This is a [Normal] effect.

Maneuver-Like Abilities: Garchomp has a great selection of maneuver-like abilities, mainly drawn from the Desert Wind discipline. It may use each of its maneuver-like abilities once before having to refresh them all as a full-round action. Garchomp's maneuver-like abilities: zephyr dance, searing charge, wind scorpion pursuit, desert tempest, leaping flame, path of the dry ones, sandstorm cloak, wyrm's flame, wrath of the desert, hungry earth. (Note that Garchomp can only benefit from wind scorpion pursuit for up to two move actions per use, even though it can take up to six move actions in a single round. Searing charge and desert tempest are also a little redundant with Garchomp's own capabilities.)

Vulnerable to Cold (Ex): Garchomp fares... very poorly in cold climates. Concentrated cold is even worse. Garchomp takes a −10 penalty against all [Ice] effects (including, but not limited to, anything with the [Cold] descriptor). If an [Ice] effect doesn't allow a save, Garchomp simply takes double damage and is sad. (This may be the only way you'll even stand a chance against it.)

Rough Skin (Ex): Garchomp's scales are extremely sharp. Each time that Garchomp is struck with any sort of attack that involves physical contact between it and its attacker, no matter how brief (including unarmed attacks, natural weapons, and the vast majority of melee touch attacks), that creature takes 1 point of slashing damage for every 2 of Garchomp's HD. (The sample Garchomp deals 7 points of slashing damage with Rough Skin.) Unlike similar properties of other creatures, this damage is dealt every time hostile contact with Garchomp is made, which means that it can work on the same creature more than once per round. This damage is also dealt once per round to all creatures engaged in a grapple with Garchomp, though a creature that is somehow able to grapple Garchomp without making contact with it is unaffected by Rough Skin.

Sandstorm (Sp): Garchomp may cast sandstorm at will, as the spell. Caster level 15th.

Dual Chop (Ex) Garchomp is able to make two full attacks with a single full-round action. However, if it does, it takes a −3 penalty to all damage rolls for the round. It must decide whether or not to make the extra attacks and take the penalty before beginning its attack routine. (This penalty will be cumulative if Garchomp uses Dual Chop with more than one full-round action in a single round – which it's perfectly capable of doing. Luckily for Garchomp, it doesn't take the second (or third) penalty until it begins its second (or third) extended full attack routine.) Garchomp's damage rolls return to normal at the start of its next turn. This is a [Dragon] effect. (Garchomp has a penchant for using Power Attack to enable its later attacks to actually do damage if it's going to use multiple Dual Chops in a round, since its final attacks for the round will be taking a −9 damage penalty and it doesn't quite have enough power to overcome that.)

Ludicrous Quickness (Ex): Garchomp isn't called the Mach Pokémon for nothing – it's able to take three full-round actions in a single round (or any other combination of actions that could be taken with three rounds). It can also take three swift or immediate actions in a single round. That's right, Garchomp gets three rounds' worth of actions in a single round, and it gets them every round. No, it's not under the effects of time stop or anything like that – it's just that goddamned fast. Yes, Garchomp can tear your face off before you even have time to blink. And it probably will. (Cue utter envy from the monk class.) It's for this reason and this reason alone that Garchomp's Challenge Rating is higher than its HD – it can nearly match the action capacity of a typical four-person adventuring party. If you make one tactical error, Garchomp will end you.

Being subjected to a slow effect reduces the number of full-round actions Garchomp can take in a round by 1 (so it can only take 2), instead of restricting it to a single standard or move action. All other effects of slow are suffered as normal. Multiple slow effects can be stacked onto a single Garchomp, up to a maximum of 3; the second slow effect reduces it to being able to take only 1 full-round action, and the third reduces it to a single standard or move action as normal for a slow effect. Other effects of slow aren't stacked. This is a specific exception to the rule that multiple slow effects can't be stacked onto a single creature. Other conditions that reduce a creature's action capacity affect Garchomp much like a slow effect does for the purposes of determining how many actions per round it can take (though these conditions can't be stacked with themselves onto a Garchomp like a slow effect can, though you can stack them with each other). A condition that allows for no actions in a round, such as dazing, stunning, or paralysis, does not have a reduced effect upon Garchomp.

Certain actions can incur accelerated costs if Garchomp overdoes them. For instance, each full-round action that it spends running counts as 1 round against its limit, so Garchomp gets tired out from running 3 times faster than other creatures do. It does the same amount of running as any other creature sharing its Constitution score before it gets tired — Garchomp just does it in less time. (Of course, Garchomp's more likely than not caught its quarry long before it gets fatigued.)

Slash (Ex): The threat range of Garchomp's claws is 18-20, and its claws are treated as magic weapons for the purpose of overcoming DR. This is a [Normal] effect.

Flight (Ex): Garchomp flies just like a sonic warrior, treating its Charisma score as being 8 points higher than it actually is for determining its fly speed. Garchomp is also able to accelerate and generate a sonic boom, and its Ludicrous Quickness enables it to accelerate, decelerate, and cover distance 3 times faster by taking 3 full-round actions in a round.

Dig (Ex): Garchomp may charge while burrowing. If it emerges from the ground to launch its attack, it gains a +3 bonus to attack and damage rolls. This is a [Ground] effect. 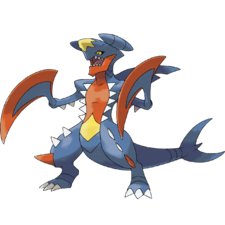 Mega Garchomp (Ex): Garchomp has a special reaction to the megavolve spell. While under the effects of megavolve, Garchomp loses its Rough Skin and Ludicrous Quickness (gaining Gabite's Quickness instead), it loses 10 feet from all its movement speeds, and its Dexterity is reduced by 4. However, it gains a +8 increase to all other ability scores and the following ability:

At 17 HD, Garchomp learns Dragon Rush (Ex): Garchomp gains additional power when charging, and can slam its body into foes in a most devastating manner. When charging, if it hits, the foe takes an additional 1d6 points of damage per hit die (which can stack with Take Down) and is knocked prone if they fail a Balance check (the DC is equal to the damage dealt). If the foe is knocked prone, Garchomp can continue the charge to another foe as long as it has movement left in its current charge action (if it doesn't, it has to spend another full-round action to initiate a new charge). This is a [Dragon] effect.

At 19 HD, Garchomp learns Draco Meteor (Su): Once per hour, Garchomp can use a full-round action to call down a massive meteor anywhere within Long Range. A 50' radius area is hit, with all in the area suffering 200 damage with a Ref Save for half (Charisma-based). Those who fail the save are knocked prone and pinned under a very real meteor. Using this bestows a −4 penalty to Garchomp's Charisma until it next rests. This is a [Dragon] effect. In a contest, after all points are awarded, the Contest ends due to obliteration of the stadium.

A skilled Pokémaster can teach Garchomp Outrage (Su): When Garchomp enters an Outrage, which takes a full-round action, everything within 50 feet takes 1d6 damage per hit die. This leaves a smoking crater in the ground. The following round, it automatically uses the ability again, this time hitting for 1d8 damage per hit die out to 75 feet. Finally, on the third round, it deals 2d6 damage per hit die out to 100 feet, then becomes exhausted for one minute. This cannot be used while fatigued or exhausted. This is a [Dragon] effect. Due to Garchomp's Ludicrous Quickness, it often uses all three Outrages in the same round (using all three of its full-round actions), which tends to leave its foes very, very dead. Even with Ludicrous Quickness, Garchomp still needs a full minute to recover from its exhaustion after using this move.

With the correct equipment, it's possible to teach Garchomp to use Earthquake (Sp): Garchomp may cast earthquake, as the spell, once every 1d4 rounds, with a caster level equal to its HD. This is a [Ground] effect.

With the correct equipment, it's possible to teach Garchomp to use Stone Edge (Su): With a standard action, Garchomp can cause hardened granite to form around its claws in an unusually sharp "blade" of stone and strike a foe. It makes a regular claw attack, and if it hits, it deals an additional 10d6 damage. It threatens a critical hit on a 16-20 (11-20 if it takes Improved Critical), but the bonus damage is of course not multiplied. If it hits, the stone shatters, so the ability must be activated again with a standard action. If it misses, it remains in effect for future attacks, until it successfully hits. Even though Garchomp has two claws, it can still only attack once when using Stone Edge. This is a [Rock] attack. In a Contest, if it wins a point, it automatically gains a massive success, gaining an extra point and raising the DC.