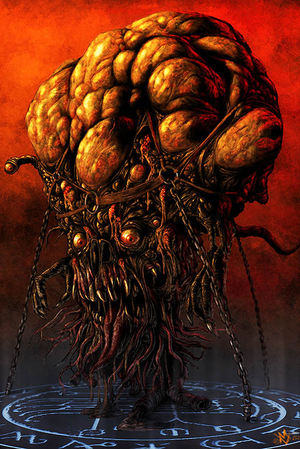 "Their forms change, their methods change, and their motives change, but demons always stay the same."

Looming before you is a gigantic creature the vague shape of a 20-foot tall decomposed head. Its flesh, if whatever disgusting substance that covers its body could qualify as such, is a mottled black, riddled with gigantic scarred pits and oozing pustules several feet in diameter. Starting in place of a hairline is a massive cluster of bulbous sacs that coat the creature’s entire head, each of which is filled with what appear to be eggs for some other unknown Abyssal monster. The demon is wrapped in large steel chains, each link the length of a man’s arm, that bind it to the earth where a pentagram of Abyssal runes falls within its imposing shadow. Struggling against the chains that hold it down, it causes several sacs to burst, releasing multiple smaller demons that swarm over it to attack you with heightened fury.

The sibriex are tremendously old and powerful demons created by the Queen of Chaos for the express purpose of mustering and equipping Abyssal armies. One of the key objectives of both sides during the Great War was to control as many sibriex as possible, and when their demonic jailors could not keep control of a sibriex they typically preferred to kill it rather than allow it to fall into enemy hands. Because sibriex numbers were few even at their peak, these tactics decimated their numbers to the point where there are only a few hundred left in the entire Abyss (and never more than one per layer). Universally held in captivity by other demons, they are often closely monitored and guarded by other creatures in addition to the beings they can create of their own volition.

Since it is unable to launch many forms of physical attack on its own accord, a sibriex contributes to a battle by summoning monsters to aid it. Even if initially encountered alone, it never remains so for long.

A sibriex cannot move, but it tremendously tough. It can substitute its Fortitude save for any effect that would require a Reflex save, shrugging off the effect and receiving a reduced effect normally through sheer durability.

Bile Blast (Ex): A sibriex may release of gout of acidic bile from its mouth as a standard action that either affects a line 5 feet wide, 5 feet high, and 150 feet long or a cone 75 feet in all its largest dimensions. All caught within immediate take 15d8 points of acid damage and are immediately pushed to the farthest possible edge of the area of effect. A successful Reflex save (DC 27) halves the damage dealt and negates the pushback effect; any creatures summoned by the sibriex are treated as having improved evasion against this effect. This save is Constitution-based.

Burst Spawn (Ex): When it is attacked, a sibriex may take an immediate action to summon any demon (or demons) it desires that have a Challenge Rating equal to its own -2 (a default CR of 13). This ability functions as the summon monster spell (thus making the maximum amount of creatures capable of being summoned by this effect equal to fifteen and preventing the combined CR of the summoned creatures from ever exceeding 13), but is extraordinary in nature, preventing the summoned creature’s from being banished or dismissed.

Form of Madness (Ex): Any non-demon who sees a sibriex sees a vision of the probable future: demons being summoned from every direction and swarming at them in an effort to rip them to shreds, inciting panic in creatures that fail a DC 25 Will save. Those who fail now attack as though each creature they attack is under the effect of a displacement spell. This save is Charisma-based.

Hover (Ex): A sibriex is naturally buoyant, constantly hovering above the ground and gaining all benefits of the Hover feat. As such, it is immune to any effect or form of detection that requires the target to be in contact with the ground. In addition, any creature not possessing at least 15 feet of reach (the equivalent of a Huge creature) cannot attack the sibriex in melee while on the ground.

Sentinel of the Obyrith (Ex): Combined with its high vantage point, a sibriex’s numerous flexible eye stalks allow it a constant 360-degree field of vision. A sibriex can never be surprised, flanked, or caught flat-footed. It also gains an insight bonus to Armor Class equal to its Intelligence modifier.

Surgeon of Chaos: As a full-round action useable at will, a sibriex may call upon the powers of the Abyss to bestow the benefits of a Fiend feat (even if the creature is not normally capable of taking Fiend feats) on upon a creature of its choosing for one hour. Alternativly, especially if your campaign does not use Tome feats, use the list of fiendish grafts provided by the Liber Demonica. A creature who receives such a graft and is either not capable of taking Fiend feats or already chaotic evil becomes that alignment for the duration of the graft’s attachment (being able to take Fiend feats renders someone immune to this alignment change). An unwilling creature may make a successful Fortitude save (DC 25) to resist receiving the graft, but once it is applied there is no save against the change in alignment. This save DC is Charisma-based. The sibriex may only apply one graft at a time to any particular creature, and can never apply grafts to itself.

Because it possesses the Graft Flesh feat as a bonus feat, a sibriex may apply grafts by the normal, more time-consuming (but also more permanent) method as well. As noted above, a sibriex is also treated as having Graft Flesh for any applicable type of graft (any such graft must be applied by normal means, however, and cannot be attached by the ability above).

The Ties that Bind (Ex): In order to prevent them from exercising their full power and escaping from their Abyssal captors, each sibriex is bound to the earth by a magical seal and multiple enchanted chains. This seal prevents the sibriex from being affected by any conjuration spell—including teleportation effects such as dimension door, and plane shift—by any creature with a Challenge Rating of 20 or less, including itself.

The chains are permanently animated as though under the effect of a telekinesis spell, allowing the sibriex to manipulate them at will. In order to prevent the sibriex from moving, however, at least one chain is always bound to the nearest solid surface or an attached creature (see below).

On a melee attack, the sibriex can latch a chain to a creature and initiate a grapple as a free action. If the sibriex wins the ensuing grapple check, the creature is grappled normally. But if the other creature wins the check and is willing, it may pull the sibriex at one half of its normal movement speed, allowing them both to move at the same time while sharing a space.

True Sight (Ex): A sibriex sees naturally as though it were under the effect of a true seeing spell.