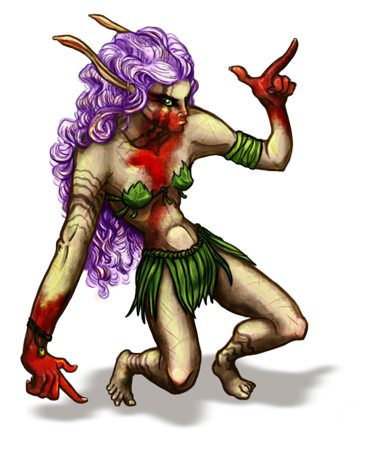 Yearlings are known as caestelphia in the Sylvan tongue. Most folk prefer to call them yearlings.

Yearlings are high spirited, energetic fey folk. Easily inspired and quick to learn, they naturally draw trouble. They don't waste time dawdling over what might have been, or the endless possibilities of decisiveness. They act.

The young turn aged quickly, and every moment is a precious wonder as each experience is new, and in their short time, nothing is forgotten. Because of this, they stare in awe and wonder at other folk and their surroundings. Their curiosity and little experience often gets them into trouble, as they fall victim to tricks that seasoned folk have had the opportunity to learn from and avoid.

Yearlings are averse to steel and iron, and suffer disabling morale effects when in possession of it. Precious metals (such as gold, silver and mithral) don't bother them, which is thankful as they tend to be drawn toward shiny bits, trinkets and baubles. While these precious bits have value (personally or monetarily), yearlings rarely horde possessions, being likely to give treasures as gifts to friends and allies.

When young, a yearling's broad shoulders, strong arms, and bulging chest appear imposing. However, its pale soft skin, extremely long and delicate pointed ears and gentle inquisitive face shows its true nature. Yearlings, unlike their fragile cousins the pixies, are tough and rugged, as they lack typical fey magical powers with which to protect themselves. Without this magic, yearling bodies are less protected from the pains of life, and many become scarred in their short lives.

Their large, pale-hued eyes dart about with curiosity. Long, fine, pale hair flows about their shoulders and backs, as it grows quickly, reaching several feet in length before its growth slows. Yearling hair is generally wavy and usually in pastel hues, occasionally appearing opalescent in sunlight. Rarely do they trim their hair, as it quickly grows back to it's full length anyways. Some yearlings braid their hair or tie it back in an effort to keep it out of their faces when performing acrobatic feats. An amusing side-effect of their hair growth makes yearling hair common among wig makers for its availability and fine quality. Yearling hair and eyes both typically come in colors that are "less common" than those among humanoid folk, such as purples, oranges, greens, yellows and blues, ranging on the pale side of course.

Yearlings have perhaps the most extremely pointed ears among fey kind, pointing above and well beyond the height of their heads. Their ears often twitch in reaction to the sounds of the scenery around them.

Unusually, yearling fingernails and toenails are shiny and whitish like nacre (mother of pearl).

Fashion among yearlings is rough at best. They tend to wear loose, piecemeal clothing, such as loin clothes, shawls, sashes and even large leaves gathered from their woodland homes. Yearlings born and raised away from humanoid cultures in the deep wilds tend to wear little or no clothing at all.

When they are young, They are strong and lean, bounding over obstacles in the forest. As they age, their faces do not wrinkle, but they grow more pale and their entire form shrinks a bit. A yearling is about as tall as an elf, but of a thicker build when they are young. Aged yearlings have the physical build of a typical elf.

Most common races pity the short lives of the yearlings. Other fey, who are typically very long lived or even immortal, look down at them with disgust, as if the race of yearlings is cursed.

They are hardly welcome in elven cities, who find them irritating with their constant need of information. Humans often tolerate them the best, but not in large numbers. Most other races find them meddlesome. Because of their curious nature, they tend to want to tag along, and this can make them a greater nuisance.

Within cities, they typically function as peasant laborers, taking training quickly and easily. However, their attention span has to be dealt with, often with special payments that reward their curiosity. If that obstacle can be overcome, several generations might take to holding the same job position, passing it along as inheritance. As they are so quick-lived, working day and night, some employers of yearlings form little attachment to their well-being, sending them to dangerous duties that other folks shy from, or that are disablingly difficult to perform for long periods of time. Occasionally, yearlings revolt or abandon such jobs unless presented with a strong reason to stay. Wanderlust often gets the better of them.

Because yearlings grow quickly, they are quite impressionable at nearly all times. They are quick to take to the alignment of those around them. When left alone in the wilds, they tend toward neutrality.

Yearlings live mostly in the untamed wilds, wherever enough food can be found to survive on. With their quick lives, they tend to live in areas that are bountiful year-round and unspoiled by the effects that populations of harvesting humanoids have on the lands.

Yearlings do not gather in large numbers, and survive by hunting small animals and gathering fruits, shoots and tubers. Occasionally, small groups of yearlings have been known to dine on large flowers and the light of the full moon.

When yearlings do venture into cities or encounter civilized races, it quickly changes their lives forever. Established cultures offer a teeming abundance of knowledge and sights to soak up.

Yearlings have little reason to worship deities, unless convinced that they should. However, this does not mean that deities have abandoned them, as a yearling can quickly take to a cause and become a servant of any deity. Though, most often, it is the agents of the forest who call upon them to protect the woodlands.

Yearlings speak Sylvan, but also pick up Common right away. Sylvan is a complex and fluid language, and since yearlings are so short lived, they are only passable speakers. It is thought they learn Common by spying on travelers when they are children.

Yearlings are often named after basic Sylvan nouns, rather than traditional fey names. These names are most often translated into Common around other folk. Yearlings typically only have a single name, though some might adopt nicknames or other monikers. Some adopt the names of their parents as a means of identifying themselves among cities where their parents may have lived or frequented.

Some yearlings are tougher than the rest of their kin. They've somehow attained the magical nature inherent in other fey. Add these traits to the standard racial traits to build a +1 LA yearling. These yearlings are known as caestelphia zuhl.

Yearlings reach adulthood at 3 months. Pregnancy lasts 9 days. At 6 months they hit middle age. They rarely live to see their first birthday. As such, they don't keep track of time in the same manner that other races do. Yearlings only meditate for 2 hours a night, and while they do not need to rest for 8 hours to regain spells, they must refrain from participating in strenuous activities during that time. Because of this, they make suitable night watchmen.

Yearlings have excellent memories, and as each day passes, they can recall details of faces, emotions, sights, smells and events with marvelous clarity. While living only a short year, they retain the vivid memories of an entire lifetime. For this reason, it is wrong to pity the yearlings, for their lives are short to us, they burn bright while they are here.