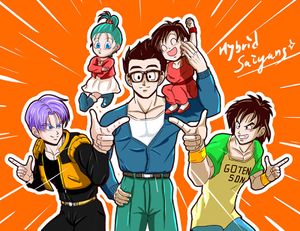 I got the idea to make this race after using and seeing The-Marksman interpretation of the Saiyan race and class. Many of the abilities of a Hybrid Saiyan are the same as a regular Saiyan, so I used The-Marksman's race Saiyans for a reference point for this classes abilities. Many of these are direct quotes from his material and deserves full credit and recognition for their work

Hybrid Saiyans are a cross breed between Humans and Saiyans. These beings are incredibly strong, mixing the fighting prowess of a Saiyan, while keeping the general intelligence and potential of a Human. Most Hybrids are raised on Earth and are almost indistinguishable from a regular human, besides sometimes having a monkey-like tail.

Most Hybrids are no different from most Humans. They tend to have a moderate and kind disposition, but are not incapable of evil and thoughtless acts. Though sometimes when put into situations of extreme stress and duress, they can explode with extreme anger, making them more powerful and completely unpredictable fighters. Many often become adventurers and great warriors. Though unlike Saiyans who like to wander the world, Hybrids will usually stick to an area, often acting as a protector or hero in the community.

Hybrids look usually no different than a human. Sometimes they will have weird or unusual hair. The only notable difference is that most Hybrids are born with Saiyan tails, and can transform into a mighty Oozaru. It is possible for a Hybrid to be born without a tail, and may be subject to different abilities, see "Important for all Hybrids" in the racial stats below.

Hybrids get along with any Chaotic good or neutral race generally, liking to take justice into their own hands to the point of sometimes becoming vigilantes. They sometimes have difficulty with more lawful types but never show any undue aggression or hatred for these races. Unlike most mixed races, Hybrids do not suffer much from racism from their human side. However many Saiyan's can view Hybrids as a threat, or resent their talent.

Most Hybrids are some form of Chaotic; but unlike their Saiyan parent, lean toward Chaotic Good for the most part.

Hybrids have no land or people to speak of. Most Hybrids are simply raised by their Human and Saiyan parents and are adopted into Human society with little to no problems since their appearance isn't to different from either a Saiyan or Human. Most of the time they will be raised by their Human parent while their Saiyan parent is off adventuring or training. Even if raised in a Saiyan community, they often are respected for their great strength and leadership, although this strength can lead to some Saiyans resenting, or downright hating them out of jealousy or fear.

They have no notable religious practices or philosophies and like humans, heavily vary from person to person. They will tend to lean of course to good aligned gods, like Kord or Corellon. But usually simply respect them and their followers, rather than being a follower themselves.

All Hybrids speak common as both parents are common speaking races.

A Hybrid Saiyan's tail can be removed by anyone with a slashing weapon making an attack roll against the tail. Hybrid Saiyans may wear the tail around their waist for an additional +10 bonus to AC against attack rolls made against their tails. Hybrid Saiyans who lose their tail immediately lose their racial skill bonuses, their Oozaru alternate form ability, and take a −4 penalty on Balance, Climb, Jump, Move Silently, Swim, and Tumble checks for that day. The penalty is reduced by 1 at the end of each following day. Tails can be restored by Regenerate, Limited Wish, Wish, or Miracle spells, or they can regrow naturally. See the regrowth table below.

So, for example: Lucian, a 5th-level Hybrid Saiyan, fights an Eight-Headed Hydra, which is a CR 7 monster, and gets brought down to −5 hit points, but is saved by his allies. After being restored to full health (either by rest or magic), Lucian would gain experience equal to his hit dice (5) multiplied by the 5 hit points that he was below 0, and then multiplied by 10, which would look like this: 5 (for HD) × 5 (hp below 0) = 25 × 10 = 250. So Lucian would gain an immediate 250 experience points upon reaching full health.

A Hybrid still dies at −10 hit points like any other character would. A Hybrid who dies as normal and is then resurrected does not gain a zenkai bonus or any other benefits, regardless of what spell is used to restore them.

Click here to get more information on how this transformation works and for diplomacy checks to help control an Oozaru. A Hybrid Saiyan raised among other Saiyans knows of this form and what happens during a full moon, most Hybrids generally keep good track of when the next full moon is, and may go to bed early so that they won't change during the night, that is; unless they intend to change.

For example, a Hybrid Saiyan born with a tail can take the Saiyan Elite feat since he could be taught to control it by his Saiyan parent, and has access to the form themselves.