This article is about the Tome Ranger. You may be looking for the SRD:Ranger. 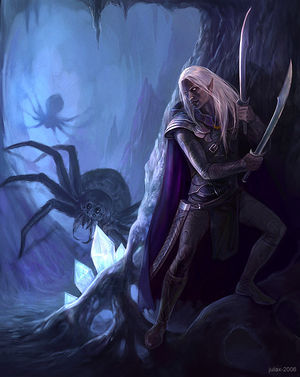 You were expecting someone else?

No one should ever play the standard ranger when they can play a druid instead. A real ranger is a peerless hunter, a legitimate threat in multiple forms of combat, and not always necessarily devoted to the protection of nature. It's easy to imagine an evil ranger that would use his connection with nature simply to further his own ends, or perhaps even lacks any such connection at all beyond the fact that he fights better in a natural setting than elsewhere.

A ranger places more emphasis on mobility than a fighter or barbarian, since he lacks the action interruption abilities of the former or the universally applicable raw attack strength of the latter. That said, he is still a very capable and adaptable combatant boasting large amounts of utility.

As the ranger gains levels, he becomes much better at killing creatures of certain types. And thanks to the psychological phenomena of generalization, he is able to utilize this knowledge to combat enemies with traits and abilities similar to his favored enemy.

Abilities: Strength, Dexterity, and Constitution all help to ensure a ranger's combat efficacy. Aside from those three, Wisdom is the ranger's most important stat as it governs the effectiveness of the favored enemy class feature and his ability to track enemies.

Races: Rangers can come from any race.

All of the following are class features of the ranger.

Weapon and Armor Proficiency: A ranger is automatically proficient with all simple and martial weapons, light and medium armor, and shields.

Animal Companion (Ex): A ranger starts play with an animal companion, which may be any animal that normally has a Challenge Rating equal to his character level -2. Templates may be added on to the creature so long as its CR remains at the appropriate level and so long as they don't make the companion an invalid type; templates added should be policed at the discretion of the DM. At first level, the ranger may have an animal companion with a CR equal to his own (such as a wolf), but such a companion cannot be advanced until 4th level.

Should the ranger ever lose a companion (either by death or voluntary release from service), another one automatically comes to his side after 24 hours if he so desires.

Once he reaches 4th level, the ranger may have a magical beast as his companion, but it also must meet the normal CR requirement.

This list is not necessarily intended to be exclusive and may be expanded at the discretion of the DM.

Tracker (Ex): A ranger possesses an extraordinarily keen sense of smell, and is able to detect creatures by scent out to a distance of 10 feet per class level (this allows the distance of the ranger’s scent ability to exceed the norm of 30 feet, but otherwise follows all normal rules). In addition, the ranger also gains Track as a bonus feat at first level.

ToP: The ranger instead gains the Tracker feat instead of Track.

Favored Enemy (Ex): A ranger trains himself vigorously in the destruction of certain types of foes, hereafter referred to as favored enemies. At every even-numbered level, he may choose a favored enemy from the list below, adding another type of creature to his list of favored enemies and granting benefits based on both his class level and the type of enemy selected. Despite the implications of the name, the benefits of choosing a favored enemy are not only applicable to that type of foe; instead, his experience fighting certain opponents aids the ranger in fighting other creatures with similar attributes. Favored enemy benefits are divided into three categories: minor (accessible starting at level 2), advanced (level 8), and major (level 14). Once a new tier of benefits are unlocked, they are gained for every favored enemy the ranger has previously chosen and every one he selects afterwards.

A ranger gains certain benefits that apply regardless of what favored enemy he chooses. He automatically has the Edge against any favored enemy even if their base attack bonus exceeds his own. In addition, he gains a +2 bonus to attack rolls and damage on all attacks (melee or ranged) against any creature that is designated as a favored enemy. In addition, all attacks from BAB (excluding attacks gained through hasting effects or Two-Weapon Fighting) gain a +1d6 bonus to damage rolls. This damage bonus increases by another d6 for each additional favored enemy the ranger possesses after the first. These bonus damage dice are not multiplied on a critical hit. They also should not be confused with Sneak Attack dice, and do not count as such for any prerequisites or abilities.

Finally, a ranger is well-versed in the tracks, habits as well as the language of his favored enemies, gaining a competence bonus to Survival checks made to track such creatures equal to one half his character level.

ToP: The ranger gains a +3 competence bonus to Survival checks made to track favored enemies instead of the normal bonus.

Nature Walk (Ex): A 2nd level ranger no longer incurs penalties for moving over difficult terrain, and may track a target regardless of any means they may use to cover their tracks (including a pass without trace spell) as if they were moving normally.

Thrill of the Hunt (Ex): A great ranger will not rest until their quarry is caught. A ranger who is tracking does not need to eat or sleep as long as they continue making the Survival check necessary to keep the trail. They also do not suffer from the effects of fatigue or exhaustion, no matter how long they move, even when running, so long as they are still tracking. If the trail is broken or if the ranger catches his prey, the ranger takes no immediate ill effects, but must wait a period of 1 hour before he may regain the effects of this ability. He may track in the meantime, but does not receive these benefits. This ability is also conferred upon the ranger’s animal companion, but not any party members or other comrades.

In order to gain the benefits of this ability, the ranger must be actively tracking a target via Survival checks or other normal tracking mechanics (whatever is applicable). Simply declaring that he is hunting them does not suffice.

Natural Predator (Ex): A 3rd level ranger is extremely good at killing things, even those that aren’t counted among his normal favored enemies. By taking a move action to make a Survival check (with a DC of 15 + the Challenge Rating of the creature), he can identify a single opponent that he can somehow sense. Doing this allows him to treat that foe as a favored enemy and gain the associated attack and damage bonuses against it, even if it is not counted amongst his favored enemies. Use of this ability does not actually increase the number of favored enemies the ranger possesses, and as such does not grant him another bonus damage die, bonuses to Survival checks, or the unique benefits accorded to favored enemies of that type. This ability is useable at will and lasts for 1 round per two class levels of the ranger.

ToP: Instead of a normal Survival check, the check is made with whatever relevant identification skill the Tome of Prowess dictates for the creature type of the opponent in question (one of Arcana, Geomancy, Survival, or Thaumaturgy).

Camouflage (Ex): Starting at 5th level, a ranger can use the Hide skill in any sort of natural terrain, even if he does not have cover or concealment. So long as he is in natural terrain, he may Hide even when observed. In addition, if he stays still for an entire round (not moving or performing any actions), the ranger becomes invisible (with all normal limitations of the spell) until the end of his next turn.

ToP: Due to different rules for the Perception skill, a camouflaged ranger instead only becomes undetectable by sight.

ToP: When tracking, you may more twice as fast as the indicated result, though you may not move faster than flat-out.

Skirmisher (Ex): By 7th level, a ranger is superbly mobile and fleet of foot in combat, allowing him to move 5 feet as a free action immediately after making an attack roll. This does not count as his 5-foot step for his turn, but provokes attacks of opportunity normally. This extra movement can only be applied to attacks gained from BAB. If he wishes to use this ability out of turn (such as after making an attack of opportunity), it counts as an immediate action.

Ghillie in the Mist (Ex): A 9th level ranger is able to blend in almost perfectly with his surroundings. So long as he is in natural terrain, he gains 20% concealment. At level 17, this improves to 50% concealment. Because it is not magical in nature and stems purely from the ranger's ability to melt into the wilderness, this concealment cannot be penetrated by true seeing spell or a similar effect.

In addition, a 17th level ranger is seamlessly able to blend in to any surroundings. All abilities that depend on him being in natural terrain may now be used anywhere.

Combat Roll (Ex): At 13th level, the ranger may move up to 10 feet after a successful attack instead of the normal 5 feet allowed by Skirmisher. He also no longer provokes attacks of opportunity for this extra movement.

Bloodhound (Ex): A ranger of 15th level or higher who picks up a trail when tracking gains the effects of a find the path spell (with the tracked creature accessible as the target destination). As a result, the target destination moves as the creature does. The ranger may also receive this effect if he possesses a sample from the target with which to trace their scent. This ability is a location divination effect with a caster level equal to your ranger level; when you use it to track a creature protected by anti-divination effects, you may make a caster level check against a DC equal to 10 + the caster level of the effect) and bypass it if successful.

ToP: When tracking a creature using the Bluff skill, you may attempt to circumvent it with this effect as you would any other anti-divination effect. Use the normal DC indicated in the Bluff description.

Survival of the Fittest (Ex): Once the ranger reaches 19th level, he is instinctually recognizable to all animals, magical beasts, and intelligent plants as a friend of nature and an impossible foe (magical beasts and plants may make a Will save with a DC of 10 + 1/2 the ranger's class level + his Wisdom modifier to resist, but animals may not). As such, they automatically fight for him so long as he wishes for an encounter in which they are present (after the encounter is over, they scatter and do not follow him), even if summoned by someone else. If they are dominated or otherwise not in control of their own actions, they will simply refuse to act on any turn in which they are commanded to target the ranger, and receive a saving throw against the original DC of the spell that has bewitched them to try and shake off its effects.

The ranger develops certain skills that greatly aid him in his battles. These skills vary based on the enemy he has devoted his time to studying and chosen as a favored enemy. Any favored enemy abilities that offer a saving throw have a DC equal to 10 + 1/2 the ranger's class level + his Wisdom modifier. For the purposes of these abilities, the category "humanoids" refers to both the humanoid and monstrous humanoid types.

Back to Main Page → 3.5e Homebrew → Classes → Base Classes