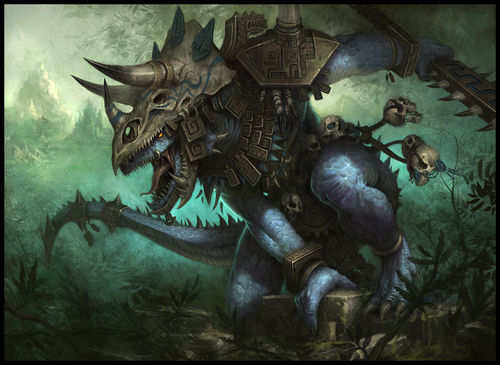 This is an image of one before their planet was destroyed. Most Uongo-mijusi, in this day and age, are significantly smaller, more civilised. However, a small sect has attempted to become like their ancestors, doing so by becoming Evolutionists. Making them look very similar to their ancients.

External Anatomy: Uongo-mijusis, are about 5' 6", and at first appear very reptilian, due their forked tongues, reptilian tail, and blue-scaled body's. But are in fact more mammalian than reptilian.

Internal Anatomy: Uongo-mijusi bodies are sleepless, and only need to meditate for 2 hours per day. When meditating, uongo-mijusi are blinded, and deafened. Spells and powers per day are reset after meditation. Uongo-mijusi can delay this, but become shaken after 24 hours without meditation, confused after 30 hours, and Nauseated after 36. To get out of tight spots, uongo-mijusis can speed up their hearts to three time its normal rate. They can also slow there heart beat down by half.

The only internal thing that emulates uongo-mijusis as reptilian, is the fact that they lay eggs. Usually having 3-5 eggs. Uongo-mijusi, will not give a second thought to eating straggling hatchlings.

Uongo-mijusi were birthed from a far distant planet, that was mostly composed of rain forests, and high mountains - or at least that's what the archaic data suggests.

Uongo-mijusi were enslaved by the vile zeigeist. A massive blue slug-like creatures, who destroyed the uongo-mijusi culture, and life - imposing their own type of utilitarianism. The zeitgeist's insatiable greed, became their undoing.

The Zeitgists moved the uongo-mijusi planet into the Dynasties system. But underestimated the uongo-mijusi, allowing uongo-mijusi inside their walls... What happened to the doomed solar system is just theory - for few escaped. It is known that the ethos involved manifest destiny. But the rest is very murky. Some story's say, that they were creating a galaxy destroyer, and it backfired; others say, they were working on an ultimate mind implant/ or mind control, that was destroyed by rebels - but destroyed the mijusi home world; and others yet, say that a group of galactic conspirators brought about the alliances demise.

What ever happened to the hapless solar system, still remains a mystery. But it is know that a small constituency of mijusi were able to escape the doom. Mijusi have since called themselves Uongo-mijusi, and have come to call The Fleet home.

Uongo-mijusi have a very good relationship with the zherihnghil, octoxeno, and tempus. Many would even state that they are family races, even though they have no physical or genetic similarities.

Most uongo-mijusi, are Lawful Good, as to protect themselves during their meditation. But, as to blend into a society, they have been known to be Chaotic or Evil.

While uongo-mijusis do not have a native language, they emanate emotions through different odours. While this makes them terrible poker players, it also plays as a type of body language.