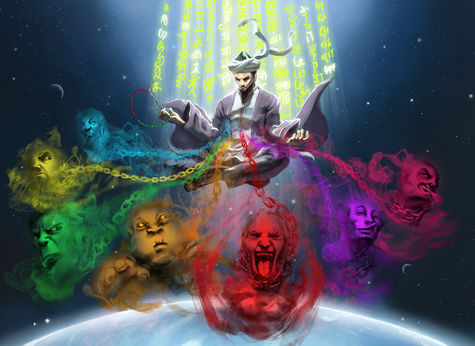 A dream lord pulling in subjects.

The masters of sleep and distillers of fear; dream lords are the Warriors of Morality, supplanting their own ideas on what is right and wrong. While suggestive by nature, most dream lords are in fact advents of good, punishing evildoers through nightmares or other forms of suffering.

Dream Lord are great for when you’re in town, and can usually give you a better relation with people. But they are also very powerful on the field of battle, controlling the body or mind of their enemies. In combat, most lords either force their enemies to sleep – fighting them in a more controlled atmosphere – or give key monsters lessons in Fear.

A lord is generally weaker in the company of another lord (lords have many abilities to negate each other). Yet, on occasion, some lords will form alliances to change morality in larger areas.

Charisma is the major ability of this class – if it is not ridiculous, you may want to rethink your character creation.

Bards are perhaps the quickest to think of ranking in this class; yet a Wizard, Sorcerer, or Cleric based lord is always going to be more powerful. The Witch, Sylvan Occultist, Paladette, High Priest and Bewitcher are also solid classes to have levels in before taking this prestige class. Some lords have been known to advance in Tormentor, Stranger with the Burning Eyes, Soulbinder, Schismsoul, Overmind, Hierophant, Celestial Beacon, or Barrister of the Nine or Assassin after taking this class.

While any race can become a lord, this path is mostly made up of Unbodied, Succedaneum, Sentient Illusions, Octoxeno, Mousa, Microforged Conglomerate, Mahaari, Eldritch Horrors, Archon Hounds and Aasimars.

Lord Spells: A lord casts arcane spells which are drawn from the lord spell list. A lord must choose and prepare his spells ahead of time (see below).

To learn, prepare, or cast a spell, the lord must have a Charisma score equal to at least 10+spell level. The Difficulty Class for a saving throw against a lord’s spell is 10+spell level+lord’s Charisma modifier.

Like other spellcasters, a lord can cast only a certain number of spells of each spell level per day. His base daily spell allotment is given on Table: The Dream Lord. In addition, he receives bonus spells per day if he has a high Charisma score.

Unlike a bard or sorcerer, a lord may know any number of spells. He must choose and prepare his spells ahead of time by getting a good night’s sleep and spending 1 hour studying her spellbook. While studying, the lord decides which spells to prepare.

Craft (Device) (Ex): A dream lord has a few devices he can manifest to aid in finding and influencing dreamers. Each device: requires a full-round action to manifest, another full-round action to use, is thoroughly unique (can only be used by the creator), and if outside of lord's possession for more than 24 hours dissipates into nothing. A lord may manifest only one item at a time, but can do so an unlimited amount of times per day.

Crystal of Dreams (Ex): At 1st level, a lord can manifest a crystal ball, which permits him to scry.

Throne of Dreams (Ex): At 4th level, can manifest a throne of dreams. The throne imparts an ability on the user that acts like the teleport spell, with the following changes: 1) can only teleport to a sleeping creature that has been found with the Crystal of Dreams; and 2) can select anything within a 5' hemisphere to teleport with; and 3) must be on the same plane as the sleeping creature.

Waking Nightmares (Su): At 2nd level, a lord may haunt others with impossible imaginations – they may pull nightmares from the plane of dreams into the waking world! This acts like a summon-aberration, except with a roll for power level. A lord can summon any number of aberrations, but must beat a DC equal to total CR. If a lord fails the save by more than 5, they themselves fall into a nightmare, receiving 2d6 points of damage and becoming fatigued; if they fail by more than 10, they also (in addition to fatigue and damage) take 1d4 points of Charisma damage and fall unconscious for one minute. Some of the energy of real objects is absorbed by the atrocities, making the visions 30% real (much like shadow spells). Monsters have a minimum duration of one minute; each minute after, a lord must beat a (DC 10+2/minute after) Concentration check to maintain the vision. Monsters have a “friendly” disposition to the lord, but are not in fact under the lord’s control.

At 4th level, a lord can add his class level to all waking nightmare rolls. Additionally the monsters are 40% real and under the lord's control like an animal companion.

Feature Advancement: At 2nd, 3rd, and 4th levels, a lord gains +1 effective class level for one of the classes he possessed before taking this class. This grants all class feature benefits of having leveled in the previous class possibly including: increased caster level, spells per day and spells known; feats, and new features as though he gained a level in that class possibly granting new abilities he didn't have before like trackless step or hide in plain sight.

A lord can choose, in place of gaining features of a previous class, to instead gain a bonus feat.

Augmented Subtype: At 5th level, lord gains dreamborn as an augmented subtype. A lord is not longer required to make a save against insanity or similar effects when in a dreamland that is not their own. (This is especially useful in the Lovecraft Campaign.)

Characters with ranks in Knowledge (Arcana) can research lords to learn more about them. When a character makes a skill check, read or paraphrase the following, including information from lower DCs.