Price to convert firearm to revolver

The Legend of Dave the Warrior[edit] 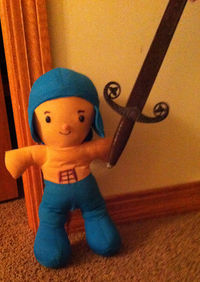 This is Dave. Fear him.

The origins of Dave are unknown. Many years ago, when The Dire Reverend still attended high school, he found a plush doll on the floor of the gymnasium. The Dire Reverend questioned two gentlemen, asking who owned the doll. They replied to Dire Reverend, "You do."

The plushie was in disrepair. his back was torn, along with a rip his crotch area. In addition, he lacked eyebrows and the muscles that we all know and love. The Dire Reverend immediately drew on eyebrows for his new friend, who he now called "Dave", along with a six pack. Unfortunately the Dire Reverend had no skills in repairing plush dolls, so the damage to Dave was not dealt with for years.

The Dire Reverend had found out that one of his friends is skilled in threads, tailoring and whatnot, so he lent Dave to his friend so he could repair him. In return Dire Reverend promised to purchase a cup of coffee when Dave returned.

Here's some stuff I made. Feel free to visit their talk pages and comment on them.