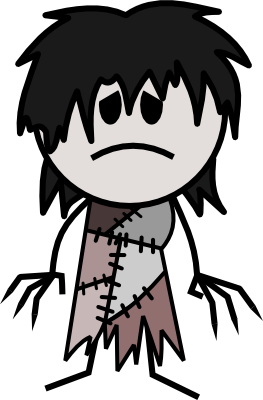 The simplified appearance of a Slaymate.

A Slaymate is a young child who has died because a parent or guardian has neglected their basic needs. The hatred and/or despair of the child sometimes is strong enough to bring back the child as a Slaymate. Most Slaymates are female, but it is not uncommon for boys to become Slaymates.

Once a child becomes a Slaymate, their skin turns an unnatural shade of pale, and they have an almost constant look of sadness. Otherwise they have the twisted appearance of a child.

Only Children Can become Slaymates. A Slaymate is created when a child is neglected to the point of death, however not all cases of neglect will create a Slaymate.

The base creature gains the Undead Subtype.

Pale Aura (Su): Any spells cast within 10 feet of the Slaymate that is also part of the Necromancy school has the caster level increased by one. Slaymates cannot benefit from their aura, but they can benefit from the Pale Aura of another Slaymate.

Slaymates, being undead, do not have a constitution score.

Slaymates are generally found with necromancers, because their ability to increase the caster level of necromantic spells. Slaymates found by themselves usually do not last long, because they are physically weak.

Same as base creature +1.

Because Slaymates are undead, they are always evil.

Same as base creature +1.