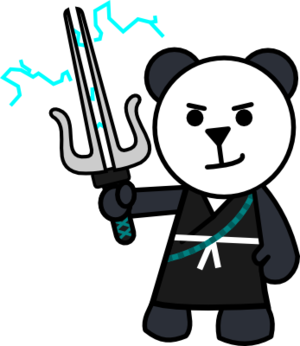 A Plushie Wielding an enchanted Battle Sai. Battle Sai are not held like regular sai, and are instead held like blunt shortswords.

A Battle Sai has a similar appearance to a regular Sai, however it is about the size of a Shortsword.

You can use the Weapon Finesse feat to apply your Dexterity modifier instead of your Strength modifier to attack rolls with a battle sai sized for you, even though it isn’t a light weapon for you. You can’t wield a battle sai in two hands in order to apply 1-1/2 times your Strength bonus to damage.

Like a sai, you gain a +4 bonus to disarm attempts.

The battle sai shares weapon proficiency with the sai. Likewise it is also a monk weapon.