This simple yet elegant looking sword is a deceptively powerful artifact of holy power, the origins of which are unknown. The blade is larger than a normal bastard sword, but just a little smaller and much lighter than a normal greatsword. Excalibur acts as a +5 Blessed1, Holy, Ghost Touch, Mighty Cleaving, Defending adamantine greatsword of Speed except as noted below.

As such, Excalibur is good aligned and bypasses the corresponding damage reduction. It deals an extra 2d6 points of damage against all of evil alignment, and all critical hit rolls against evil foes are automatically successful, so every threat is a critical hit. The sword bestows 1 negative level on any evil creature attempting to wield it. Excalibur allows for 1 extra attack per round at the user's highest base attack bonus, and the user may also make one additional cleave attempt in a round if they have the cleave feat. Excalibur allows a wielder to transfer some or all of the swords enhancement bonus to his AC as a free action that lasts until his next turn. Excalibur can interact with and harm incorporeal creatures just as easily as it does corporeal creatures, negating an incorporeal creatures usual 50% chance of concealment. Also, because it's an adamantine weapon it bypasses any hardness less than 20 when attacking other weapons or objects.

Excalibur acts like a bastard sword in that it is normally used as a martial two-handed weapon, but, because it's so light, the sword can be used as a one-handed exotic weapon if the wielder of Excalibur also has the Exotic Weapon Proficiency (Bastard Sword) feat.

1. The blessed enchantment can be found on page 113 of the Book of Exalted Deeds. It replicates Bless Weapon but is always in effect, it makes the weapon good aligned (like Holy does as well) which causes it to bypass damage reduction accordingly. It also makes all critical hit threat rolls against evil creatures automatically successful. 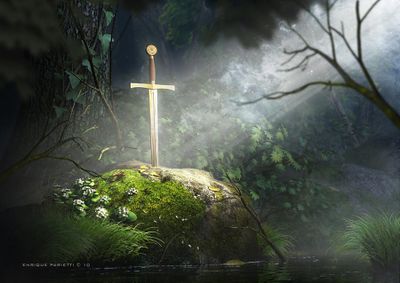