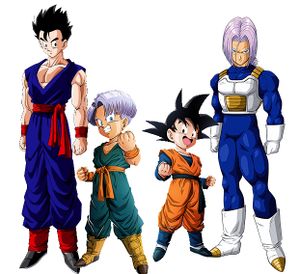 The child of a Saiyan and a Human. A Half-Saiyan has most of his Saiyan parents strength and appearance, but not their ruthless temperament.

More often than not, a Half-Saiyan is amazingly nothing like their Saiyan parents in personality. Unless raised in a completely Saiyan environment (which is rarely the case), a Half Saiyans are more like their Human parent and Half-Saiyans are not cold, emotionless, prideful, bloodthirsty barbarians like their Saiyan parent. Half-Saiyans tend to take more after their Human lineage when it comes to personality traits, empathic ability and emotions. Half-Saiyans are very in touch with their emotions and when they become emotional they are very good at focusing and channeling their emotions and rage. Saiyans often find it easier to transform into Super Saiyans than their full blooded Saiyan parents for this reason.

Half-Saiyans commonly have black eyes with dark black hair and eye brows like their Saiyan parent, but some do occasionally have Human ranges of hair. A Half-Saiyan's hair will always take after only ONE of its parents from birth. It will either be wild Saiyan hair that never grows once full grown, or it will be normal human hair. A Half-Saiyans skin is any range of pale to olive brown. Half-Saiyans generally stand between 5 and 6 feet tall and weigh between 110 to 225 pounds, with males typically taller and heavier than females. For the most part, Half-Saiyans look mostly Human, and are unable to be distinguished from humans except by their tails and wild hair, if they happen to inherit those from their Saiyan heritage. Only about 50% of Half-Saiyans actually inherit a tail or wild Saiyan hair.

Half-Saiyans are luckier than Half-Elves and Half-Orcs growing up. Half-Saiyans age at approximately the same rate that Humans do, so they dont face the maturity issue of not aging at the same rate as the other kids like Half-Elves do and they appear mostly Human except for wild hair, which could be dismissed by kids and their monkey-like tail which can be easily hidden, unlike a Half-Orc who's heritage is written on their faces. Half-Saiyans get along excellently with Humans and sometimes with Saiyans depending on how cruel and heartless the Saiyan is, and how willing the Half-Saiyan is to prove himself strong and capable to the Saiyan. Half Saiyans also get along well with Half-Orcs and Half-Elves, since Half-Saiyans understand the feeling of trying to deal with the two different sides of their genetics. Half-Saiyans get along on a case by case basis with Elves, Dwarves, Gnomes and Halflings.

Half-Saiyans have no racial deity and have no strong preference to a specific deity. Some deities that Half-Saiyans can occasionally revere includes Kord, Fharlanghn, Ehlonna or Erythnul.

Half-Saiyans have no language of their own. Instead, all Half-Saiyans learn Common or whatever language they are brought up with.

Half-Saiyans are given either Saiyan or Human names more often than not. There are no specific naming conventions for naming Half-Saiyans as a race themselves.

It is very common for a Half-Saiyan to take up the life of an adventurer. Half-Saiyans adventure for many different reasons. Most do it as a way to help out others, and enjoy going on missions. Many do it out of a sense of wanderlust to see what adventure lies over the next hill, in the next city, in the next dungeon. Some do it simply to see the world and others adventure because the see it as the easiest way to amass wealth and power.

A Half-Saiyan's tail can be removed by anyone with a slashing weapon making an attack roll against the tail. Half-Saiyans may wear the tail around their waist for an additional +10 bonus to AC against attack rolls made against their tails. Half-Saiyans who lose their tail immediately lose these racial skill bonuses, their Oozaru alternate form ability, and take a −4 penalty on Balance, Climb, Jump, Move Silently, Swim, and Tumble checks for that day. The penalty is reduced by 1 at the end of each following day. Tails can be restored by Regenerate, Limited Wish, Wish, or Miracle spells, or they can regrow naturally. See the regrowth table below. (If born without a tail, see Below)

Click here to get more information on how this transformation works and for diplomacy checks to help control an Oozaru. A Half-Saiyan raised among other Half-Saiyans or especially those raised around full Saiyans know of this form and what happens during a full moon, most Half-Saiyans generally keep good track of when the next full moon is, and may go to bed early so that they won't change during the night, that is; unless they intend to change.