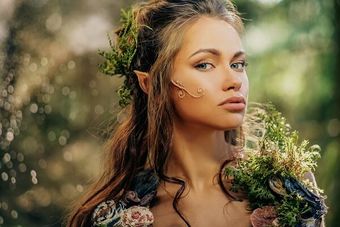 An example of the stunning beauty of an Elven Nymph.

The child of a Nymph and an Elf. The Elven Nymph is hauntingly beautiful beyond words, even more beautiful than either of their parent races.

The High Elves and the Nymph have long been allies and defenders of the woodlands and all of the creatures that inhabit them. Working so closely it is very common for an Elf (often a druid) to fall in love with a Nymph and during such unions a Elven Nymph is created.

Elven Nymphs are a great blend of their respective parent races. They have Elven grace without Elven aloofness and a Nymph's kindness and reverence of nature without the Nymph's wild and mercurial temper. Elven Nymph's have naturally big hearts and empathize easily with others, and hate to see others oppressed. They naturally love nature and animals and feel more at home outdoors in nature or in smaller towns than in the heart of a big city. Elven Nymph's are very curious creatures who enjoy travelling and seeing the beauty in nature. Woodland creatures are naturally attracted to an Elven Nymph and trust her much like they would an actual Nymph. Elven Nymphs are not normally greedy, preferring trinkets, gadgets or collecting gems/jewelry to actual gold. If they do get gold they prefer to spend it on such things that make them happy, rather than collecting the gold for the sake of accumulating wealth to become rich.

Elven Nymphs are hauntingly beautiful beyond words. They possess a level of unearthly grace and fine features that makes them an even more ideal and perfect embodiment and representation of humanoid beauty than either of their parent races. In an odd genetic trait most Elven Nymphs are born female and while there are male Elven Nymphs this is exceedingly rare. An Elven Nymph's is physically very similar to Elves in that they are short and slim, but Elven Nymphs have much fuller breasts than female Elves generally do. Elven Nymphs are slightly taller than normal Elves standing from just shy of 5 feet, to just shy of 6 feet tall, with females being slightly taller but around same weight as males. The average Elven Nymph is around 5'5" to 5'9" tall. An Elven Nymph has an excellent metabolism and they are rarely ever overweight, typically weighing 110 - 125 lbs. They have naturally perfect and blemish free skin that is usually pale to olive in color. They have no body hair, full voluptuous lips and long, swept back ears. They have large bright eyes which are usually a vibrant and vivid shade of green or blue. They have long, soft, silky hair that comes in a diverse number of hair colors, with most common being a natural blond. Other hair colors can include a dark natural red, a soft green or light brown/copper shades with black being the least common.

Elven Nymphs get along excellently with Elves, Half-Elves and Nymphs, and get along good with most Humans and Druids as well. They share in a Halfling's curious nature, but not their propensity for getting into trouble. They share a common interest in animals with Gnomes and like their sense of humor. They generally finds Dwarves to be too serious and a little greedy, and Half-Orcs to be a bit brutish. Overall, regardless of race, an Elven Nymph tends to care much more about an individuals actions and behavior, specifically how the treat the Elven Nymph themselves and how they treat nature, more than their actual race.

Elven Nymph have no lands of their own, but because of their beauty and kindness, they are always welcomed wherever they go. They live most commonly in Elven lands, but can also be found in smaller Human towns and cities. On rare occasion they will live at a Nymph pool, but this is usually only when they were raised by their Nymph parent. Unlike Half-Nymphs, because Elven Nymphs are of the Fey type the Nymph parent is more welcoming of the Elven Nymph than they are the Half-Nymphs and more likely to raise the Elven Nymph if the situation required it. That being said, it is still far more common for the Elven Nymph to be raised, and to live in Elf lands.