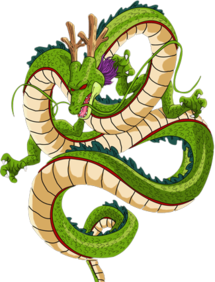 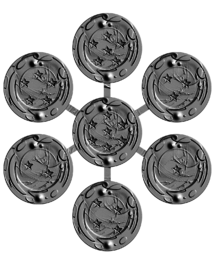 The Eternal Dragon, the deity of exploration, travel and luck, summoned by the Dragon Balls.


Shenron is an Eastern dragon, whose kind are benevolent and sacred in Oriental mythologies. Unlike the Western dragons, which have large dorsal foldable wings on their backs, he has none. He has bright vivid green scales, solid red eyes and the horns of a stag. He has a long snout with crescent shaped nostrils and a row of large sharp teeth, long flowing whiskers, and flowing green hair on his cheeks. He has four toes on each foot, each with a large razor sharp claw. Shenron is massive dragon of epic proportions, with a long serpentine body (his tail takes up three-fourths of his length). In his natural form his body is even longer than a colossal ancient red or gold dragon who are usually around 120 feet long, and Shenron is around 150 feet long. When coiled in 1 spot he generally occupies a 30 ft square.

Shenron teaches that people should explore and see the world. He thinks that they should discover new places and new things. He teaches to take the road less travelled and to take the scenic route and see the beauty around them, and to learn about the different places, creatures and plants they see. Shenron tries to encourage his followers to do this by teaching his Namekian clerics how to make the magic artifact known as dragon balls, a series of 7 small orbs, when gathered and the magic phrase is uttered, Shenron will appear before them and reward the person who gathered the balls and summoned him with any 3 wishes of their choice, usually fulfilled through use of his Miracle spell-like ability at will or through his Divine Creation or Alter Reality salient divine abilities. Shenron instructs his clerics to only have 1 set of dragon balls active per realm/plane.

When summoned with the dragon balls he normally uses his alter size ability to make himself appear larger than he really is. Sometimes appearing 200 - 400 feet long coiled along the skyline, depending how he's feeling that day, with the tip of his tail disappearing back into the dragon balls.

Shenron has no temples as he feels this would lead to people being stuck in 1 place, and not getting out and exploring. There are many shrines to Shenron on most all major pathways and even the occasional shrine on less beaten paths. His clerics generally dress in green garb with red or tan trim. They travel the path ways assisting travelers they find with food, water, aid and shelter. If they do camp with travelers they meet, they share knowledge of any dangers looming the other direction, or even just stories to entertain, all in order to help those that they meet be able to better continue in their journey.