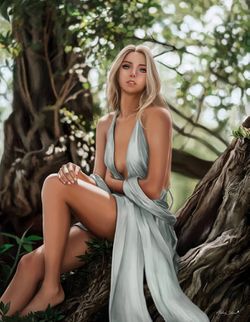 The deity of magic, knowledge and kindness, patron deity and creator of the Liantia. Her beauty is only matched by her kindness.

The deity of the Liantia, Celesdra is the creator and protector of the Liantia race and tolerates no taint of evil among the Liantia. Celesdra is often referred to as the Mistress of Magic and adversary of all that is evil. She appears in her nautral form as a phenomenally beautiful and stunning woman with long golden blonde tresses come down around her back and shoulders, with bright green eyes, and who is usually smiling. She delights in joy, wine, dance and song, and enjoys practicing and showing off magic and learning new things. She often goes incognito on the material plane as she loves to walk among mortals without being recognized. She governs those things held in highest esteem by the Liantia, such as magic, knowledge, beauty and community. Her clerics are well received wherever they go.

Celesdra advocates for harmony within the Liantian race and urges her people to work with others but to always remain true to their Liantian heritage. She tells her followers that using magic, spells and magic items is the key to all things, and that all things can be learned through learning magic. She urges her worshipers to learn something new every day, and to always appreciate the worlds beauty around them. There is no knowledge that is forbidden, but she urges her followers to use new knowledge wisely. Celesdra's worshipers are respected for their knowledge and magical prowess, and their advice is highly valued (if not always completely trusted). She teaches that life is meant to be happy and entertaining, and encourages kindness, mercy and compassion. She invigorates and heals those who champion the cause of good, or who spread true knowledge.

Celesdra's clerics favor garments that are a rich satin blue with beautiful gold trims and accents. Many have levels in Wizard or Bard as well. Her clerics often serve as leaders, teachers and diplomats wherever they go. They also perform a wide range of public ceremonies (marriages, baptisms, crowning monarchs, installing elected officials, blessing new ventues, and the like).

Celesdra's temples are usually located in highly urban areas and are built to be beautiful with many small intricate details. They house extensive libararies full of arcane lore and are sometimes hostels or sanctuaries for the infirm or handicapped. The temples themselves are also well equipped with various magical items both arcane for defense and divine for healing and helping the downtrodden. Celesdra's temples in less settled areas where monsters or raiders are a threat, tend to be very fortified for temple defense, but they are still built to be esthetically pleasing.

1: Community domain can be found on page 86 of the Book of Exalted Deeds. The granted power of the domain is: Use Calm Emotions as a spell-like ability once per day and gain a +2 bonus on Diplomacy checks. Granted spells are (in order) Bless, Status, Prayer, Greater Status (also found in ExD), Telepathic Bond, Heroes' Feast, Refuge, Sympathy and Mass Heal. In a campaign where that book is not in use or the information is just unavailable this can be replaced with the Good domain, but the stat block would have to be revised for that.

2: Great Bow can be found on page 154 of the Complete Warrior under Exotic Weapons.