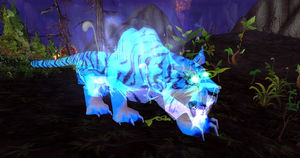 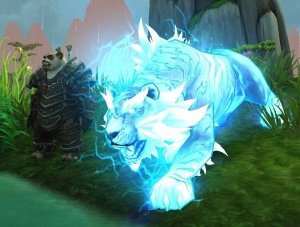 Spirit Beast is an inherited template that can be applied to any kind of living corporeal creature with a 6 or less intelligence of the animal or vermin type except for swarms. It can also be applied to any magical beast that meets the intelligence requirement and mostly resembles an animal-like creature (but not to any mostly humanoid-shaped magical beasts such as Owlbears). It can be applied to creatures of other types or of higher intelligence that still seem mostly animal-like, but only with DM discretion. These include creatures such as Giant Eagle, Giant Owl, Hellhound, Howler, Phase Spider, Rust Monster, Shadow Mastiff Wyvern, Winter Wolves and Yrthak. Gorgons cannot use this template.

A Spirit Beast looks like the base animal in almost all respects except for the base creature becomes mostly transparent and its color changes usually to that of a bluish or purplish hue. They have little wisps of spiritual energy the occasionally flicker off of them and have a faint mist that rises around their bodies as well. These spiritual energies have no effect other than visual.

Ability Scores: A Spirit Beast receives a +2 bonus to Strength and Wisdom.

Feat: A Spirit Beast gains Endurance and Iron Will as bonus feats even if it does not meet the prerequisites. If it already has one of these feats it may instead choose Great Fortitude or Lightning Reflexes

Spirit Mend (Sp): Up to 3 times per day a Spirit Beast may cast Cure Light Wounds but with a couple of exceptions. It may be cast on any willing target within 30 feet (including itself) with a caster level equal to half its hit dice. In addition the target of the spell gains a number of hit points equal to its caster level bonus for the next 3 rounds.

For example: if a Spirit Beast with 9 hit dice uses Spirit Mend it cures 1d8 damage and its effective caster level is 4. So on the round that the Spirit Beast casts it the target gains 1d8 + 4 hit points. Then the target gains an additional 4 hit points at the start of the round for the next 3 rounds. This cannot be used offensively against undead.