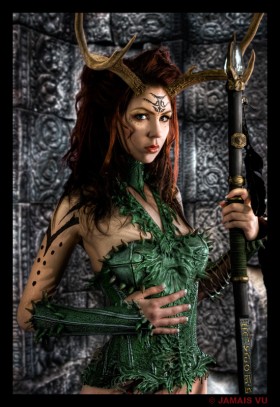 A Half-Nymph Paragon brings to two parts of its heritage together and focuses them as one, becoming more powerful and more intune with their lineage than any normal Half-Nymph could dream of.

Abilities: Charisma is the most important ability for a Half-Nymph, as it fuels the Half-Nymphs bonuses on charisma related skill checks.

Races: This class is for Half-Nymphs only.

All of the following are class features of the Half-Nymph Paragon.

Weapon and Armor Proficiency: A Half-Nymph is proficient with all simple weapons, but not with any armors or shields.

Persuasion (Ex): A 2nd level Half-Nymph Paragon's racial bonus on Diplomacy, Gather information and Sense Motive checks increases to +3. She also gains a +2 racial bonus on all other Charisma-based skills.